Kathy Sheridan: It is too late for Ana Kriégel but nettles must finally be grasped 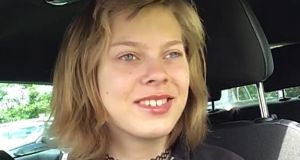 Ana Kriégel’s murder was carried out by a boy who saw a female object, not a sensate being. Photograph: RTÉ News

Many years ago, enraged upon overhearing some gendered taunting of a child in primary school, I donned my husband’s voluminous black coat, added messy mascara and mussed-up hair for effect, walked into the class in question and though gritted teeth declared that boys – “you know who you are” – must stop bullying girls. I remain grateful that the school did not ring the guards and that no one sued.

But that ferocious impulse to shut down the source of a child’s pain is a given. It is a hint of a glimpse into the agony behind the public stoicism of Geraldine and Patric Kriégel as the details emerged of their daughter’s tortured school life.

Many threads of Ana’s story lead back to obscenities facilitated by the internet and social media. But some details that stick in the heart could be from any era at all.

What is in the culture that gives a teenage boy that sense of entitlement to harass and assault a lone girl?

One was Boy B’s worldview of females, encapsulated by the 13-year-old’s view of Ana’s clothes as “kind of slutty”. Another was the sexualised abuse she encountered locally. In one incident around Halloween 2017 – some seven months before her murder – after supervising a disco for young children, the 14-year-old was walking home when she encountered a group of older boys. One asked her repeatedly for sex. She said no and as she went to cross the road, he hit her on the backside. She arrived home “hysterical, banging on the front door . . . I had to hold her in my arms for an hour to calm her down”, her mother told the court. The boy no doubt saw it as a “joke”. Gardaí dealt with the complaint by way of a caution.

What is in the culture that gives a teenage boy that sense of entitlement to harass and assault a lone girl? How often before had he done it to others? Did the terms of the caution oblige him to attend some type of awareness-raising sessions?

That was just one of dozens of such incidents endured by Ana. If she hadn’t died in such horrific circumstances, she might be just another girl who couldn’t take a “joke”.

Earlier this year, journalist Sinead O’Carroll tweeted about the sense of “frozenness” she felt on being “catcalled” at 7am on a quiet street by a group of men in a car being slowly driven by a very well-known sportsman. Later on RTÉ’s Liveline, O’Carroll noted mildly that it was “interesting the message that power can bring, that you have the ability to say or do whatever you want to someone just walking the road”.

What made that Liveline memorable was the parade of older women of my generation scorning O’Carroll’s hyper-vigilance and salivating over the notion of a catcall. But for many others, such incidents mark the lower end of a spectrum: the sportsman’s slow drive-past; the street assault on Ana (summarised as “groping” on one news site); the rising sexual assault rate. It is widely accepted that such crimes are grossly under-reported but last year, women reported them to gardaí at a rate of more than six a day. The sexual savagery that was a feature of Ana’s murder was carried out by a boy who saw a female object, not a sensate being. Where could he have picked up that attitude?

How have we used the intervening years? By failing to acknowledge the underlying culture of contempt towards women

It’s more than 10 years since a Canadian study showed that 90 per cent of boys and 70 per cent of girls aged 13 and 14 had viewed pornography. Even then, “reality sex” emails – sometimes featuring gang rapes, often filmed and disseminated by schoolchildren – were pinging regularly into the inboxes and phones of other children.

How have we used the intervening years? By failing to acknowledge the underlying culture of contempt towards women (the Me Too movement was a female cry of despair). By denigrating the attempts of adults flailing around for solutions to the tech giants’ invincibility and spurious appeals to free speech. By a failure to band together as responsible adults in homes, schools, communities and countries to agree protocols on age-appropriate phones. Some want a smartphone ban for under-14s; one senior teacher would go as far as under-16s.

Some, weary of policies and procedures, have called for an anti-bullying law (current anti-bullying policies are derived from the Child Welfare Act). Others caution them to consider the resulting avalanche of mandatory reporting collapsing into Tusla’s limited resources.

It is too late for Ana Kriégel but these nettles must be grasped.