Broadcaster never thought of himself as theologian but he enhanced communion 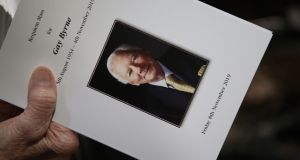 Gay Byrne: as he passed through the Pearly Gates, he was probably still asking “Why?” Photograph: Nick Bradshaw/PA

During my seminary days at the Irish College Rome, which largely coincided with the Second Vatican Council, I had a line to say in one of the plays we put on around Christmas – that “Ireland is a God-forsaken priest-ridden country”.

The Catholic Church was rediscovering itself as a communion of different persons, a movement rather than an organisation, modelled on its core belief in the Trinity (of three persons, Father, Son and Holy Spirit). But that foundational experience had maybe dried out in our God-forsaken Emerald Desert.

As Osip Mandelstam put it in The Horseshoe Finder: “The sound is still ringing, though the cause of the sound has gone/ . . . Human lips,/ that have nothing more to say/ keep the shape of the last word uttered.”

And Christianly lukewarm souls with lukewarm words are likely to provoke a range of responses, from conventional religiosity to conventional scepticism to outright rejection. But neither wan piety nor its smart sceptical sister quite get back to the originating experience of Jesus.

It’s in that context I’d put Gay Byrne and what the Irish Catholic Church thought of him. For the most part, its leadership wasn’t up to the level of Pope John XXIII’s vision of aggiornamento (bringing up to date), not to mention the global outreach of all his successors.

And that’s where Gay Byrne – who surely never thought of himself as a theologian – with his invitation to dialogue was more in tune with the council’s aim of enhancing communion than many churchmen.

He did this both with the folk he interviewed on The Late Late Show and on his radio show, and with hundreds of thousands, if not millions of listeners.

Not everyone got the point, like the unfortunate bishop who Dante would have shown forever wrapped in that shocking nightie. (Bishop of Clonfert Thomas Ryan who, in 1966, denounced a women who said on The Late Late Show she wore no nightie on her honeymoon.)

The Jewish philosopher Martin Buber says the essentials of human relationship are “distance” and “relation” – showing the other the respect and openness by which they can be themselves, and because we do that, entering into relation with them.

From a Christian perspective, that’s reliving on Earth the communion of different persons Christians believe God is.

Let us look at just a few well-known examples, to remind ourselves how much Gay Byrne can be understood as a communion person.

For example, the night on The Late Late when a woman was phoned up to tell her her daughter’s card had been picked out of the bag, winning her a car.

When Gay asked how she felt, she told him her daughter had just died. Gay immediately responded, offering to break off the call, but the mother said no.

So, after a few deeply felt words of his own, he asked a nun who was a guest on the programme to say something, then got four wonderful lines from Brendan Kennelly who was also a guest that day.

Definitely depth, “distance”, evoking the poor mother’s respect and then “relation”, a stunning moment of meeting.

When the nation was reeling at the death of 15-year-old Ann Lovett (in January 1984) having given birth to her baby at the Lourdes grotto in Granard, as others have noted, Gay didn’t respond with a denunciation of the Valley of the Squinting Windows, a crippling Victorian moralism without a heart, but gave voice to some of the many women who sent their experiences of bitter rejection for bearing children outside marriage.

Maybe an exhibit A in Gay’s art of communication was the night Mother Teresa of Calcutta was on his programme. Normally Gay’s job was to steer proceedings through the show’s two hours, but this time he recognised there was no need to interview Mother Teresa. He just let her be. And let himself be seen as knocked back by the real thing, a follower of Jesus.

I can’t help thinking that when Gay Byrne, having asked and provoked so many questions, passed through those Pearly Gates, he was still asking 'Why?'

Nietzsche says, exaggerating a bit, that “there was only one Christian, and he died on the Cross”. But if there’d been more authentic Christians like her, maybe our Emerald Desert would have been a bit less God-forsaken.

In his later years, his Meaning of Life interviews brought out Gay’s own personal quest – perhaps his discovery that if he was to get to the bottom of that meaning, he too would, like the founder of the church, have to undergo the same “why” Jesus experienced.

The 2015 interview with Stephen Fry wasn’t just a piece of staged debate – Fry’s well-practised denunciation of a god who’d allow innocent suffering was a question for Byrne too that led him into further questions.

I can’t help thinking that when Gay Byrne, having asked and provoked so many questions, passed through those Pearly Gates, he was still asking “Why?” And that he was embraced for the tsunami of dialogue on the meaning of life he unleashed on a church that wasn’t as ready for it as it should have been. Then he was given a front seat at the eternal dialogue of meaning and love that is the Trinitarian (interpersonal) God.

Fr Brendan Purcell is parochial vicar at St Mary’s Cathedral, Sydney, a former UCD lecturer in philosophy, adjunct professor at Notre Dame University (Australian campus) and author of Where is God in Suffering (Veritas, 2016), which was sparked by that Stephen Fry interview