Protesters have gathered outside the British parliament to denounce prime minister Boris Johnson's decision to suspend the UK parliament for more than a month before Brexit. Video: Reuters 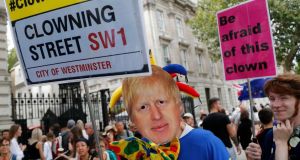 One thing preoccupies Boris Johnson more than anything else: securing his place in the annals of British history. By that measure he has succeeded already. His latest threat to prorogue parliament is no less part of that than his lifelong mission to secure the keys to 10 Downing Street. As prime minister, Johnson is now manufacturing a crisis – or at least worsening an existing one – to leverage his image as Britain’s saviour. The defender of the people’s will versus a parliament that wishes to defy it.

Johnson has always favoured lofty comparisons. But he is less Pericles – his political hero and the great proponent of Athenian democracy – and more Crassus – the wily Roman entrepreneur with a tenuous grip on morality. Crassus was famed, so the story goes, for starting fires across Rome, and charging an exorbitant price to put them out. He could charge what he wanted, knowing that anyone whose house was burning would be desperate enough to pay anything for it to be extinguished.

Since the Brexit referendum the UK and its institutions have been slowly burning. With Johnson’s latest move they are completely aflame. And he would have you believe he’s the only one who can put the whole thing out. Except Johnson’s payment won’t be in cash from desperate citizens, but the historical legacy for which he has been aching ever since his Oxford days.

He knows he can’t afford to make the same mistakes as his predecessor Theresa May, who was paralysed as her government and Brexit deal sank painfully slowly over her short tenure. Rather than allow himself suffer that fate, Johnson knows he must do something drastic to reboot the UK and be the prime minister who severed it from the European Union once and for all.

There’s good cause to believe that Johnson’s move towards suspending parliament is simply to goad his opponents into bringing down his government with a no-confidence vote, just so he can call an early election to restore his wafer-thin majority. When it comes down to the wire, the anti-no deal forces in parliament will likely try that rather than bow to his railroading of constitutional precedent.

And when it comes to securing his legacy such an election is probably the easiest of all outcomes for Johnson. Where parliament has tried to thwart Brexit – by not voting for the deal and pushing May into seeking extension after extension – Johnson will run a campaign as the man at the helm of the only credible party committed to delivering Brexit, and as the man who made it into 10 Downing Street with the promise to take the UK out of the EU “come what may”.

The election will become a second referendum of sorts, the people versus the parliament. No 10 will tell voters that they’re either with Johnson and on the side of democracy, or they’re against both. Meanwhile, as Labours run on a platform of holding another referendum the message becomes so easy for Johnson to spin that he probably cannot believe his luck.

And his team should not be underestimated when it comes to running a campaign. Dominic Cummings, his right-hand man and chief political aide, was the brains behind Vote Leave’s unexpected success in 2016. He’s blamed (or praised, depending on who you ask) with the infamous bus emblazoned with the slogan: “We send the EU £350 million a week, let’s fund our NHS instead.” Not to mention the winning slogan: “Take back control.” The pair know how to win an election, and they know how to concoct a narrative of the politicians who betray the people versus those who protect them.

If there is no election, things look pretty good for the Johnson camp anyway. He has limited his opponents’ chances to take a legislative route against no deal. He will come back in mid-October and present MPs with a deal – one that will be almost identical in spirit and letter to May’s thrice-rejected deal – and push it through a parliament terrified by Johnson and his team into allowing the possibility for anything else.

And if, when push comes to shove, Johnson goes for a no-deal exit in the end? Well, he did deliver on his promise after all.

As parliament tries to take over from the executive, and as the executive tries to disregard the legislature, one thing is for certain: the fabric of Britain’s political institutions has entirely lost its shape. Johnson’s task is to have you believe that there’s only one man to shore it back up again. What the history books will actually think is an entirely different question altogether.

Finn McRedmond is based in Westminster and writes for current affairs website Reaction.life and City AM

1 Coronavirus: Restrictions resulting in ‘huge’ fall in rate of infection growth
2 A letter to Ireland from Italy: this is what we know about your future
3 Coronavirus: Pensions will be available to collect for 90 days
4 Ireland ‘squanders’ geographical advantage with different Covid-19 stances North and South - Scally
5 US authorities scrutinise Zoom’s practices as app sees traffic surge
Real news has value SUBSCRIBE