Did his plan’s success paradoxically contribute to the crash and rise of populist politics? 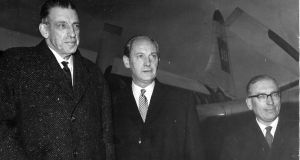 The blame for what happened in 2007 rests with politicians. By the same token, the credit for the economic turnaround in the 1960s must also go to politicians such as (from left to right) Seán Lemass, Jack Lynch and TK Whitaker. Photograph: Jimmy McCormack

Amid all the celebrations of TK Whitaker’s 100th year it is worth asking the question: why has Ireland’s civil service not produced anyone of his stature since he retired from the Department of Finance almost 50 years ago.

Plenty of able civil servants have come and gone since then, but none have had anything like the same impact. One reason is simply opportunity or, more specifically, the lack of it in Whitaker’s day.

As is well known, the young Whitaker actually wanted to be doctor but family circumstances made him choose a career in the civil service. The paradox is that the prosperity he subsequently helped create means the social welfare and education systems that followed have greatly increased the chances that budding Whitakers of this generation can pursue their medical ambitions.

Indeed the school league tables published this week revealed that some 63 per cent of the students who sat the Leaving Certificate at St Joseph’s in Drogheda (Whitaker’s alma mater) went on to third level.

It is a separate question as to whether or not it constitutes progress that an intellect that could change the very shape of Ireland should now be devoted instead to more mundane, but lucrative, tasks such as boob jobs and flu jabs.

The prosperity Whitaker helped bring about has probably helped contribute to what might be called a brain drain from the public service in other ways. In the 1960s, 1970s and well into the 1980s, the Department of Finance and Central Bank were the destinations of choice for young economics graduates.

These agencies had their pick of graduates and supplemented them by sending bright young clerical officers to study at university in the mode of Whitaker.

The expanding economy that Whitaker is credited with masterminding in turn created a demand for these economists in industry and finance in particular. Banks and stockbrokers poached both graduates and economists already working in the public sector. Most of the economists over a certain age, who became household names during the economic crash, would have cut their teeth in one or both of these institutions.

One well-known economist tells a story – perhaps apocryphal – of being sent to London by the government during the 1992 currency crisis to brief banks in the City on the Irish position. His job was to sell the line that Ireland would not be devaluing the Irish pound despite enormous pressure coming from the currency markets. So impressed was one of the bankers in the audience at this young man’s ability to lie convincingly for his country that he offered him a job on the spot.

If the consequences had not been so catastrophic it would be amusing to think that Whitaker’s genius sowed the seeds of the 2007 crash by creating a situation in which the intellectual capacity of the public service was hollowed out. Without a doubt senior people in the Central Bank dropped the ball when it came to the regulation of the banks. They were not up to the job. Neither was the Department of Finance some innocent bystander as the Nyberg, Honohan and Regling reports into the banking crash all showed.

By the time they woke up to the problem the damage was done and then compounded by the blanket bank guarantee.

But in truth the blame for what happened in 2007 rests with the politicians of the day and, by the same token, the credit for the economic turnaround in the 1960s must also go to politicians of that era such as Seán Lemass and Jack Lynch as well as Whitaker.

It is inconceivable that senior public servants in this day and age would be allowed the space to engage in the sort of long-term thinking that Whitaker and his colleagues were afforded. Even harder to imagine is that a plan requiring the same sort of fundamental commitment to change would be adopted and implemented by the Government in the way in which Whitaker’s’s plan was followed through.

By contrast almost any government initiative of any import – such as housing or water – can be, and usually is, blown off course by short-term populist concerns and concerted lobbying by vested interests. Again, you could argue that the fragmentation and short termism of the “New Politics “ are in some way an inevitable by-product of the prosperity of the last 50 years; in particular the trend towards what became know as globalisation, something that Whitaker understood before most and saw the opportunity for Ireland in it. But such churlish thoughts would not be in keeping with the birthday spirit.