John McManus: Why we have no right to spend Apple’s €13bn 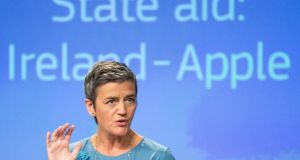 European Commissioner for Competition Margrethe Vestager went out of her way on Tuesday to encourage other countries and the US to try to recoup the tax “owed” to Ireland. Photograph: Stephanie Lecocq/EPA

One thing that seems to be taken for granted in the debate about what to do about with the putative Apple windfall is that the €13 billion in question is our money and we are entitled to it.

The whole thing is increasingly being framed as Ireland facing a profound choice. Do we keep faith with Apple and appeal the decision, or do we take the money the European Commission says its owes us and spend it on roads, schools and hospitals?

Cabinet members are split on the issue and the Opposition is happily holding their feet to their fire, calling for them to do what is right and fair in their view: take the money and run.

Fairness and money do not make for easy bedfellows. In the case of Ireland and Apple’s €13 billion, combining them does not really result in the outcome the Opposition – or Government – is looking for.

Applying a test based on fairness actually makes a nonsense of the idea that we face some sort of existential moment, torn between what is expedient and what is just. Instead it makes it clear that the €13 billion is not our money at all and we have no right to spend a penny of it. We should in fact give it back, but not to Apple. It is not Apple’s money either.

The Irish authorities agreed to a scheme where only the minuscule portion of that money which related to the sale of Apple products in Ireland would be taxed. Some of the money was sent back to the US as payment for research (and was ultimately taxed in the US in some fashion) but the vast bulk remained offshore and untaxed.

The commission is in no doubt this structure was illegal. It believes the profits should have been taxed in the countries in which they were made (the big EU economies funnily enough) and the balance sent back to the US and taxed there.

Commissioner Margrethe Vestager went out of her way on Tuesday to encourage other countries and the US to try and recoup the tax. She said any tax they could recoup will come out of the €13 billion “due” to Ireland, implying it was really owed to them.

Even if the US or any other country wanted to go down this road, there is no certainty they would be successful and it would involve ripping up the rules to which governments and multinationals adhere. The €13 billion could be stuck in limbo for a decade as legal action piled up on legal action.

It is not our money but we are in possession and that, as the old saying goes, is nine-tenths of the law.

But that does not belie the fact that it is not our money and if we really wanted to do the right thing, we should give the money back to the countries where the tax should have been paid in the first place and to the US where Apple is based.

We won’t. And nobody expects us to.

But the argument is liberating. It means that politicians can stop pretending they are trying to do the right thing, which is frankly always a little bit nauseating.

Basically it is wrong for us to use other people’s taxes to pay for our roads, schools and hospitals. It is not our money. It is also wrong for us to do our very best to help Apple hang on to it by challenging the European Commission.

Neither course of action even comes close to being the the right thing to do; they are just different versions of the wrong thing. The decision we face is essentially which of these wrong things is in our best interest.

But if you were looking for a distorted moral compass to guide you through this question, it is probably the maxim of the “honest” politician: once you are bought, you stay bought.