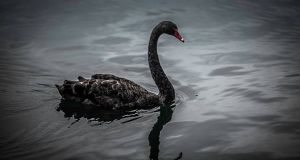 A black swan and a reflection.

Most advertisements for financial services carry a disclaimer along the lines of “please remember that past performance may not be indicative of future results”.

With hindsight it might have been a good idea for Sinn Féin to have put something similar on its election literature. Not so much as a warning to the potential buyers of its election promises but to reassure those rivals thinking of getting into bed with the party post the election.

This is because a key question for any putative coalition partner of Sinn Féin is whether its performance over the last 20 years of on-again off-again power sharing under the Belfast Agreement – and the 30 years of sectarian violence that preceded that – is indicative of the future results of a coalition government led by, or involving, it.

A student of the financial markets will quickly tell you not to bet on it. Not only that, they will tell you that we may just have seen the political equivalent of a Black Swan event; think the dot-com bubble bursting in 2001 or the collapse of the US housing market that precipitated the fall of Lehman Brothers in 2008 and with it the financial crash. All bets are off. The market gets reset.

The name Black Swan event is a reference to the universally held belief in the West that all swans were white until black ones were discovered in Australia in 1697. Among other things, these events are characterised by the failure of everybody who thought they knew what was going to happen to predict the future accurately.

On the face of it the election result would seem to meet this criteria handsomely. Nobody - not the voters, the pundits or the politicians themselves - came close to predicting that Sinn Féin would emerged with the largest share of the popular vote and 37 seats, just one behind Fianna Fáil and two ahead of Fine Gael.

And of the people who voted for them 38 per cent put housing and homelessness down as the most pressing issue facing the country, not Irish unity which is Sinn Féin’s raison d’etre.

The party itself clearly didn’t see it coming as evidenced by the failure to run enough candidates to fully capitalise on the swing in its favour.

So now what? If the individuals who have guided the party’s performance over the last 50 years had a post-election plan, it has gone out the the window. Nobody knows what the consequences will be for the party itself of its stunning result.

For a start its pretty clear that the party doesn’t really knows much more than we do about some of the candidates that it put up for election and who have now ended up as Dáil deputies. The embarrassment caused by the newly elected deputy for Kildare North TD Réada Cronin’s off colour views on Israel and the judiciary being a case in point.

If this is the party’s Black Swan moment then it may be a category error to assume - as many do - that the dynamic that pertains between the party’s elected representatives at Stormont and shadowy figures in the wider republican movement will be seamlessly transposed to Leinster House, should they enter government. This, more than its its centre left policies, seems to be the biggest stumbling block to coalition with the larger parties.

It’s perhaps too early to call, but it is also worth remembering that the biggest mistake made by those who should have known better in 2008 was to not even entertain the possibility that everything changed with the collapse of Lehman Brothers.