Its time for the EU to be a power project

The emerging world order will increasingly be shaped by might, rather than law 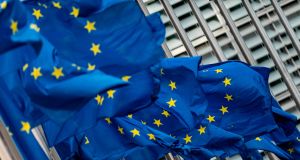 The European Union flags fly at half-mast as a tribute to former French President Jacques Chirac in front of the European Commission building in Brussels on September 30, 2019. KENZO TRIBOUILLARD/AFP/Getty Images

In Britain and the US, the idea that the EU could aspire to be a superpower is usually treated as either ludicrous or sinister.

So when Guy Verhofstadt, a prominent member of the European Parliament, recently made the case for the EU to be part of an emerging “world order that is based on empires”, there was a predictable backlash. At the Conservative party conference a few days ago, his words, taken from a speech to their anti-Brexit enemies the Liberal Democrats, were cited as evidence of the dangerous imperial ambitions of the EU - and proof that leaving the bloc is the UK’s only safe option.

Mr Verhofstadt can be arrogant. But, in this case, he also happens to be right. The rise of China and India, and the America First policies of Donald Trump’s US, makes it more important than ever that European countries defend their interests collectively.

The EU once dreamt that the whole world would move towards a law-based system, similar to the EU method. But a world order, shaped by Xi Jinping’s China and Trump’s America, will be based on power rather than rules. The outbreak of a global trade war underlines that small European countries can no longer rely on international rules to protect them. They need the bulk and heft that the EU provides.

The former Belgian prime minister’s choice of the word “empire” - with its connotations of conquest - was unfortunate. The EU is an empire by invitation. Nobody is forced to join. And, despite the difficulties of Brexit, any member is free to leave. It would be more accurate to say that the EU can and should aspire to be a superpower - one of four or five major global powers, capable of shaping the world order.

That aspiration is eminently achievable. Indeed, in important respects, it has already been achieved. Last week provided an interesting illustration when the European Court of Justice ruled that individual countries can demand that Facebook take down defamatory content, on a global basis.

The ECJ ruling was made in response to a complaint from an Austrian politician - and prompted an immediate and concerned response from Facebook. If this had just been a ruling by an Austrian court, the Californian internet giant would have been able to brush it off. But the ECJ has sway over a market of more than 500m people - compared with the 9m in Austria. Facebook’s ambitions for Libra, a digital currency, will also be shaped by rulings made in Brussels. The EU’s decisions - good or bad - change the behaviour of the world’s largest firms, from Silicon Valley to southern China.

The EU is most comfortable and powerful when acting on economic issues such as trade or competition policy. But it is also a geopolitical force. Russia’s annexation of Crimea and continued interference in Ukraine has been met with sanctions and travel bans that have slowed the Russian economy and hemmed in the Russian elite. Last August in Moscow, I found myself commiserating with a member of President Vladimir Putin’s inner circle who is now banned from taking his summer holiday in southern France or Italy. Bodrum in Turkey, we agreed, was just as nice.

The collective power of the EU is also evident over Brexit. The British elite is still trying to adjust to the fact that, for the first time in centuries, Ireland is pushing Britain around - rather than vice versa. The EU economy (even without Britain) is more than five times the size of the UK economy. Backed by the rest of Europe, the Irish can stand their ground on Brexit.

Of course, those who scorn the idea that the EU can ever be a superpower have some powerful points. They stress that the EU lacks the military muscle to back up its geopolitical ambitions - a problem that will get worse when Britain leaves. The critics can also point to damaging disagreements within the EU - on issues ranging from migration to the future of the eurozone.

It is also true that EU countries spend less on the military, as a percentage of gross domestic product than the US, Russia or China. Europe’s reliance on US military deterrence continues to anger the White House. But even if the US pulled all its troops out of Europe, which is unlikely, it would still be a huge gamble for Russia (or anyone else) to risk military aggression against a collective with the size and wealth of the EU.

The fact is that, in the nuclear age, advanced industrial nations tend not to go to war with each other. Big power struggles are played out through other means - such as the current trade war. And here, the EU - with its huge internal market and a unified trade and competition policy - is well-equipped to slug it out with China and the US; it comfortably outmatches Russia or India.

It is true that the EU is riven by internal divisions. But all political entities that are large enough to aspire to superpower status are also large enough to be plagued by internal splits. This is true of the US, where political rivalries are so acute that the president is tweeting about civil war. It is also true of China and India - just look at the problems in Hong Kong and Kashmir.

Like all “empires”, the EU could eventually fly apart. But the external pressures on European nations makes it more likely that the EU nations will manage their differences and continue to pull closer together. The EU used to be called a peace project. In the modern world, it is more of a power project - and rightly so.