It’s time to talk about Irish unification as reconciliation

Robin Wilson: North will stagnate unless it remains open to wider Europe 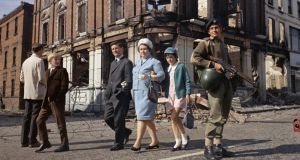 When the vice-president of Sinn Féin, Michelle O’Neill, told her party’s annual Easter commemoration in west Belfast that there should be a referendum on a “united Ireland” within five years, she hardly recognised the full significance of the anniversary she was conjuring up.

Five decades before 2023, on March 8th, 1973, there was just such a Border poll in the north. Indeed, the Conservative government in London intended that it be repeated every 10 years. But the referendum was overwhelmingly boycotted by Catholics, and a meaningless majority of more than 500,000 backed the status quo.

1 Why our love for Leo is withering on the vine
2 No obvious signs of injury on remains of McGinley children
3 Varadkar blames British ignorance of Ireland for Brexit impasse
4 Una Mullally: Those attacking Sinn Féin have become cheerleaders in reverse
5 Dancing with the Stars: Glenda Gilson sinks like Titanic
6 Coronavirus: death toll rises to 81 with nearly 3,000 confirmed cases
7 Patient advocate on HSE board resigns in protest at ‘tokenistic’ treatment
8 Ken Early: Klopp adds spice to ‘uninteresting’ FA Cup replays
9 Fintan O’Toole: The terms of Brexit hold a great irony
10 Fine Gael to stress economic warnings as concerns grow
11 Six Nations 2020: Ireland looking for a fresh start under Andy Farrell
12 Pilita Clark: When a rude boss keeps you waiting, why not walk out?
13 Coronavirus outbreak: Irish community endures Hubei lockdown
14 ‘It’s something you don’t want to hear. You always think it happens in other places’
15 US president Donald Trump pays tribute to Kobe Bryant
16 The Offload: Doris, Kelleher and Cooney to give Ireland a new look
17 ‘We serve neither Queen nor Commisar’: The birth of the Provisional IRA
18 Henderson Park seek €400m+ for prime Dublin office blocks
19 I’m Irish and I live abroad. Why have we been forgotten in Election 2020?
20 ‘If something happens to me, what will happen to my girls?’
21 Five things to watch out for in Apple’s earnings
22 Brexit is a collective English mental breakdown
23 Comcast acquires Irish cloud-based telco Blueface
24 Why are Fine Gael and Fianna Fáil refusing to go into coalition with Sinn Féin?
25 Plenty of politicians’ promises, but what about these ideas to help consumers?
26 Gonzaga shock Blackrock for historic Leinster Senior Cup win
27 Snow and hail makes driving conditions dangerous in west
28 All in the Game: Kylian Mbappé’s Gruyère nightmare
29 Money matters: ‘My father embarrassed us with his haggling’
30 New study shows difference between boys and girls in certain skills
31 Are almonds bad for the environment?
32 Swing voters still silent as week three of election campaign begins
33 US threatens retaliation against EU over proposed carbon tax
34 Ireland’s housing crisis in five revealing graphs
35 ‘Life is busy . . . this can be difficult for a new vegetarian such as me’
36 Kobe Bryant dies in California helicopter crash
37 David McWilliams: A fall in house prices should be our goal
38 Bobby McDonagh: Light a candle for Brexit
39 Election 2020: Welcome to moving week as voters’ choices harden
40 Body of a man found in Letterkenny
Real news has value SUBSCRIBE