It’s not a housing crisis. It’s an apartment crisis 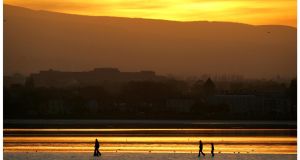 Instead of building structures with great views of the sea and mountains, we seek to “protect” these vistas. Photograph: Bryan O’Brien

When we ask ourselves what’s the solution to the “housing crisis” in Dublin, we are already asking the wrong question.

This is an apartment crisis. There is a supply problem, we are not building enough, not building in the right location, and not building the right type of home. And also a demand problem. We Dubliners simply don’t like apartments, and what we are supplying is depressing demand for sustainable urban living.

We don’t like apartments, because we “abuse” them. We have abused them in the past and continue to abuse them today. We have delivered too many small, poorly configured, undesirable, apartment homes. We have failed as a city to “crack” the design challenges of building spacious, light-filled, apartment homes with high ceilings, dual aspects and ample storage.

In Dublin’s north inner city, an area with a population of 20,000 (the size of Athlone), half of all apartments have just one bedroom, most of these are 38sq m.

Our size standards are now getting smaller. We are witnessing a race to the bottom. The constant revision (downward) by the Department of Housing, Planning and Local Government has brought not just enormous uncertainty to the apartment market but has resulted in developments ready to go being constantly shelved and revised. The results are ever-higher urban land prices, increased uncertainty and ironically not even the delivery of increasingly smaller apartments.

Critically this is not simply about the wrong policy choices, it’s also about a wider cultural anti-urban sentiment.

This is not simply about the wrong policy choices, it’s also about a wider cultural anti-urban sentiment

As planners, politicians and policymakers, we endlessly talk up the “need” for high-density, sustainable living. We rarely talk up – and genuinely convince – of its “desirability”. Few decision-makers live in the centre of our city, even fewer live in apartments.

There is also a disconnect between the high-density vision and policy detail. Dublin City Council has a height cap of just 16m across most of its residentially zoned land outside the canal ring. That’s just four storeys for a residential block, or five storeys with minimum ceiling heights.

And why as a city do we “protect views” of coastline and parks instead of building desirable, spacious homes – yes 150sq m apartments – in delightful towers overlooking them?

Is it sustainable or economically efficient that trains trundle to Malahide and Portmarnock with fields on one side and an empty coastline on the other?

The need to protect views of parks or coastlines is so ingrained as a cultural taste in the mind of Dubliners that, as a policy, it’s simply assumed

The need to protect views of parks or coastlines is so ingrained as a cultural taste in the mind of Dubliners that, as a policy, it’s simply assumed.

Dublin City Council Development Plan states that “Developments should take account of views towards the bay and Dublin mountains”. Obviously, it never crossed the mind of the authors that this could mean the very opposite of what they intended. In a residential crisis, we should be taking advantage of views to deliver fantastic-quality apartment urban homes.

It partly explains the age-old Irish problem of building in the wrong location. In 2014, Kildare, Meath and Wicklow accounted for 14.8 per cent of all Irish home starts. Dublin City Council with the same population accounted for 4 per cent. By 2017, these counties had risen to 16.1 per cent and Dublin City fallen to just 3.3 per cent.

The four Dublin local authorities accounted for 30 per cent of all housing in 2008, by 2017 that had crashed to 13.3 per cent. Co Donegal had more housing starts than Dublin City Council between 2014 and 2017.

Finally, why is it that Dublin has come to a consensus that it is not economically possible to build spacious apartments at the centre of our city? Is it because we conflate the issue of affordability with desirability?

There is an assumption that the final price of all apartments in the city centre needs to be affordable. They don’t. Implicit in this thinking is a rarely stated belief that living in apartments in the urban core is solely the default choice of those on lower incomes.

Residential property in the centre of most cities is rarely – without public subsidy – likely to be affordable. The mere idea that anyone with wealth and three children would want to live in an apartment in the centre of Dublin city is beyond the imagination of too many planners and suburban policymakers.

Dublin has enormously changed for the better over the past 20 years, but too much of Dublin’s inner city is not good enough. It is not family-friendly, pedestrian-friendly, clean, green or safe enough.

Had you been told that the Irish economy would grow on average by 6.8 per cent a year over 15 years (1993-2007) might you have expected a more beautiful, livable, green, pedestrian and child-friendly inner city?

A yes or no answer to that question is troubling and deserves a more honest discussion about our “housing” crises.