Israel has a legal responsibility to provide vaccines to Palestinians 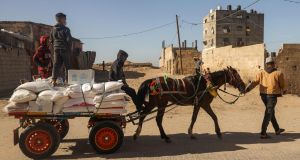 Gaza has recorded more than 50,000 Covid-19 cases and 520 deaths since the start of the pandemic. Photograph: Mohammed Abed/AFP

When I heard about the first seven coronavirus cases being detected in Bethlehem last March my immediate thought was how would Palestine survive a pandemic whilst under occupation.

I thought of my parents who live in Gaza alongside two million others in an area the size of Co Louth. The blockade of Gaza and the control exercised by Israel over access to and from the West Bank chokes supply chains and the movement of people. Our inability to raise our own funds as a sovereign nation coupled with an underfunded health system, intermittent access to medicines, energy, water and technology have left us with particular vulnerabilities in a pandemic.

In Gaza the devastated healthcare system is suffering from chronic shortages of electricity and all medicines as well as medical staff shortages and ancient oxygen supply systems. Since the start of the Covid-19 pandemic, Gaza has recorded more than 50,000 cases and 520 deaths. The virus has spread rapidly in the congested enclave, where 70 per cent of the population are refugees. It is overcrowded with multigenerational families living together in camps in a place deemed almost unlivable by the UN.

Our underfunded and vulnerable health system would find that a pandemic would stretch us to the limit. Our president, Mahmoud Abbas, was quick off the mark in announcing a state of emergency and the Palestinian government accordingly declared a 30-day lockdown that was renewed as the cases surged. Palestinians were confined to their homes. Many of them work in Israel and were either trapped beyond the checkpoints or left without any income. The already weak economy deteriorated and the 28 per cent unemployment rate faced the Palestinian Authority with an almost insurmountable challenge. Israel was also withholding our tax revenues leaving thousands falling deeper into poverty in the midst of the pandemic.

The challenges of poverty and the pandemic were exacerbated by a poor olive harvest and the continuing daily violence directed at Palestinian farmers by settlers and the Israeli military. Trees and saplings were uprooted in their thousands, farmers were attacked and in some cases hospitalised, dogs were used to attack livestock and drive farmers off their lands, and home demolitions increased to an all-time high. Notices and tenders for settlement-building reached record highs and the construction of the illegal separation wall and associated settler-only infrastructure continued.

The Palestinian Ministry of Health has been talking to anyone who will help. We have 3.2 million citizens in need of the vaccine in the West Bank alone. We asked to buy 10,000 doses from Israel for our frontline workers and medical staff and received a meagre 2,000 doses this week, according to our ministry of health. The Palestinian Authority has also engaged with the World Health Organisation’s Covax scheme for underdeveloped countries, and directly with all vaccine manufacturers. The earliest we can hope to see any vaccine doses arriving is mid to late March.

Meanwhile, in another world, Israel secured early access to the Pfizer vaccine and has managed to vaccinate more than two million Israeli citizens. Also vaccinated will be the 600,000 Israeli settlers on Palestinian land beyond Israel’s 1967 borders. Israel has ignored its responsibility as an occupying power and has not given access to the vaccine to Palestinians, with health minister Yuli Edelstein quoted on Sky News as saying: “They have to learn how to take care of themselves… I don’t think that there’s anyone in this country, whatever his or her views might be, that can imagine that I would be taking a vaccine from the Israeli citizen and, with all the goodwill, give it to our neighbours.” As an occupying power Israel has a legal responsibility to those so-called “neighbours”.

Israel claims that the 1993 Oslo Accords absolve them of their responsibility regarding healthcare. These accords were temporary and intended as a roadmap towards an independent Palestinian state. The accords were never implemented in good faith by Israel and their obligations under international law as occupier still stand. Article 56 of the Fourth Geneva Convention stipulates that the occupier has a duty to ensure “the adoption and application of the prophylactic and preventive measures necessary to combat the spread of contagious diseases and epidemics”. The Geneva Convention is the bedrock of civilised multilateral relations.

There is a clear and obvious determination to subjugate the rights of Palestinians in favour of preferential treatment for Israelis. Everything from the justice system to the planning authority is two-tier; there is one rule for Israelis and another for Palestinians. The pandemic and the vaccine crisis have clearly shown there is no parity of esteem in the treatment of people, with Palestinians constantly subjected to Israel’s regime of institutionalised discrimination and segregation.

As an occupying power, Israel has the legal, moral and humanitarian responsibility for the vaccination of the Palestinian population. The minimum Israel must do is fulfil this obligation, among the many it has accrued over five decades of its military occupation of our land.

The international community also has a responsibility to put pressure on Israel to abide by these obligations. Only by ending these glaring inequalities and injustices can we secure a future of peace and independence. A negotiated two-state solution is within our grasp if the will to drive it forward exists among our international partners. The Palestinian people deserve nothing less.

Jilan Wahba Abdalmajid is ambassador, mission of the state of Palestine