Irish publishers left on the shelf by Man Booker Prize 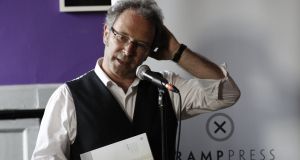 Mike McCormack’s ‘Solar Bones’ needs to be considered for the Man Booker Prize. But we can’t submit it.

Who cares about the Man Booker Prize? For most people, if the name is recognisable at all, it’s an award for the snooty elite – “posh bingo”, as Julian Barnes once described it. But for the literary crowd, the announcement of the longlist in July every year is an important date.

Like it or not, the Man Booker award is powerful: it drives sales, but it also shines a light on the unknown (there are five debuts on this year’s longlist). And for the winner, it quite literally can change a life.

At Tramp Press, we have just the thing: Mike McCormack’s Solar Bones. Mike is “one of our bravest and most original writers”, according to Kevin Barry. The Guardian review said: “Excellence is always rare and often unexpected: we don’t necessarily expect masterpieces even from the great. Solar Bones is exceptional.”

We’re already on a reprint. A copy was given to Joe Biden when he was here a couple of weeks ago. Random, lovely readers email us about it all the time. And, when the generic “What should be on this year’s Booker longlist?” articles began coming out, Mike’s name kept popping up.

In fact, the Irish come second only to UK writers when it comes to taking home the gong, with past Irish winners including Anne Enright and John Banville.

The Man Booker’s eligibility requirements state that books have to be published in the UK. Irish publishers can’t submit for the slightly lesser-known but very important International Man Booker Prize either, for the same reason.

On the surface, this seems like a harmless, if strange, rule. Surely where a book is published shouldn’t particularly matter to a prize for literary excellence. But the organisers have the right to make whatever rules they like.

However, the way in which this particular clause plays out is dismaying: it empowers the world’s largest and most powerful publishers to engage while sidelining independent publishers that don’t happen to be based in the UK.

Every big publisher (Hachette, Harper Collins, MacMillan, publishers that have headquarters in France, Germany and the US) has acquired Britain- based imprints. For them, submitting work for one of the most important literary prizes in the world isn’t a problem.

Closer to home, Donal Ryan’s exceptional The Spinning Heart would never have been longlisted for the 2013 Booker if Doubleday hadn’t picked it up alongside independent Dublin publisher The Lilliput Press.

Independent publishers based in Ireland therefore face a challenge when they find and champion a book they believe in. The only way to make sure it is in with a chance for major awards such as the Man Booker is to co-publish or even sell it on to a publisher with a UK base.

The Man Booker, whether the organisers mean to or not, preserves a system in which Irish work has to be passed on to UK presses.

The results is that ambitious authors skip past Irish publishers altogether, which is a loss to our sector. Or an Irish publisher works hard on a title, only to hand it over.