Ireland should be ashamed of our treatment of asylum seekers

How can the Irish as a migrant people show no regard for those in direct provision? 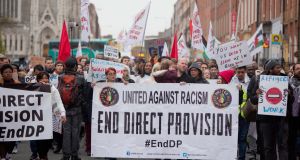 What’s wrong with our legislators? Are they collectively incapable of multi-tasking? Irrespective of which party is in the ascendant, it appears their greatest capacity is making excuses. When actions we should reasonably expect of them don’t happen, it’s generally on account of “pressure elsewhere” whether that’s Brexit, the Northern Ireland Assembly or promoting ourselves at Davos. We’re fed some explanation.

Whatever about us citizens, it’s hard to imagine the justices of the Supreme Court being too impressed at having to make a definitive ruling on the rights of asylum seekers to seek employment. The true separation of powers is one of the great benefits of a mature and functioning democracy and its fundamental importance was again evidenced by the Supreme Court’s decision to move on the rights of asylum seekers to look for employment and to be entitled to do so, unfettered by the restrictions imposed, as it has now been reported, by a government-appointed advisory taskforce.

Last May, the Supreme Court gave a preliminary ruling that asylum seekers had a constitutional entitlement to seek employment. It was, in effect, giving guidance to the legislature to take the necessary political decisions to make this happen and it gave it six months in which to act.

Recently, instead of leading, the Government made a half-hearted move on the issue demonstrating the sleight-of-hand which has been a hallmark of our approach to all things to do with migrants and refugees over the last dozen years.

Writing in this newspaper at the time of the original Supreme Court ruling, I said it offered “the Dáil the opportunity to set about its responsibilities towards migrants in a comprehensive and considered fashion and in doing so to act in our interests, as the people who elect it”.

Chance, as they say, would be a fine thing. There should be no surprise at its failure but I’m heartened to live in a country where, when guidance given by the highest court in the land is ignored by legislators, the court swiftly moves from offering advice to establishing the law. It should be embarrassing to every member of the Oireachtas that the Supreme Court had to do its job and protect one of the most basic of all human rights. That’s what happened; no more and no less.

The Supreme Court ruling was saying that it had given our legislators six months to sort this out but, seven months on, it did not trust them to do so.

Why is there so little anger about this whole sorry saga? Is there no sense of national shame that over 4,000 people live among us in direct provision which is a Department of Justice euphemism for “detention”? Why do we expect our politicians to lobby Washington in the interests of the “undocumented” Irish in the United States and allow them to ignore the rights of the “over-documented” Syrians, Afghanis, Somalians, Eritreans et al who live here?

How is it that we fail to see the utter hypocrisy, as a migrant people, of our showing such scant regard for those who’ve come here fearing persecution and even death and treating them as we do? It’s hard not to conclude that it’s to do with ethnicity and cultural difference; issues that are neither relevant nor remotely consistent with the way we and our political leaders attempt to portray ourselves as a people. There’s no one area of life in Ireland where the absence of moral leadership in politics is more obvious.

The Government’s failure to have the appropriate response in place within the six-month period again raises the question of its interest in delivering justice to asylum seekers. That the respect shown by the Supreme Court to the legislature in granting it time to resolve matters was not reciprocated is alarming.

Our Chief Justice was forced to give the Government a mini-tutorial on how the legislature and the judiciary interact in a functioning democracy; when the Supreme Court finds a measure unconstitutional, the court would normally declare it to be so and thereby render it inoperative. Only exceptional circumstances warrant a deferral and he pointed out that, while the court had found exceptional circumstances in this case, it had, in its original finding, put a time limit on the deferral.

The failure of the State to meet that was disrespectful of the Supreme Court and raises serious questions about the ability of the Department of Justice to meet its responsibilities.

Refugees and asylum seekers have taken enormous risks to come here. They are good, determined souls who’ve experienced hardships unimaginable to us; they want to work, learn and to settle where they can live in peace and make a contribution. Some will return home when the situation allows. It’s an echo of sorts with the Irish who’ve had to go overseas; some stayed and added greatly to their new homeland, others returned, most with positive accounts of their experience. What would those returning from here, after years in direct provision, say of Ireland?

We need to wake up to our responsibility as a successful, wealthy, peaceful nation. We can welcome and integrate migrants so they can contribute economically and culturally to society or we can continue, with measures like direct provision, knowing they’ll become increasingly isolated and disillusioned.

We must recognise that failure to harness the great potential for good among asylum seekers would not be their fault. It would exclusively be ours and future generations would see it as such. Migrants warrant investment to allow them grow with us and to enhance our economy and our already multicultural Irishness. This needs urgent attention.

Fintan Drury is chief executive of the Platinum One Group, a sport management business