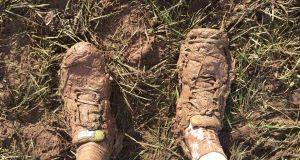 “The squelching was interrupted only by the occasional splash, where the rains had not yet found a vacancy in the soil”

I woke up last Sunday thinking of the famous closing passage from James Joyce’s The Dead. This was partly because of the weather, which was broadly similar to what Gabriel Conroy experienced in the story:

“A few light taps upon the pane made him turn to the window. It had begun to snow again. He watched sleepily the flakes, silver and dark, falling obliquely against the lamplight. The time had come for him to set out on his journey westward . . .”

That was the other thing: I too had to set out on a journey westward. Not on a voyage of self-discovery, like Conroy, but because during temporary leave from my senses recently, I had been talked into membership of a team competing in the All-Ireland Masters Cross-Country Championships at Clarinbridge, in the men old enough to know better category.

So I dragged myself out of bed and had several mugs of strong coffee. Then I packed a rucksack for the expected arctic conditions. Then, still bleary-eyed, I checked my watch and, no longer quoting Joyce, muttered: “F**k! I’ll miss the bus.”

Snow was not general all over Ireland on this occasion. It was falling neither on the central plain, nor the Bog of Allen, nor indeed into the dark, mutinous Shannon waves.

But no sooner had we crossed that great river – which took longer than usual because of recent rains – than the ground turned white.

No wonder, amid all the horrors of the trenches, it was the mud that drove so many to despair

Soon afterwards, so did the air. It was through a blizzard that we headed into South Galway. And I braced myself again for what lay ahead: frozen ground, wind-chill factor, numb toes.

Then instead – lo! – the snow cleared. And by the time we arrived at the venue, we were once more among green fields. Even the wind had died.

The sun now glinted cheerfully on the thermal blankets of the juvenile athletes, who had already raced. Conditions seemed downright pleasant.

I had not yet noticed the mud.

The first hint of that was from a veteran who returned from the course with advice about shoelaces. “Double-knots today, lads,” he said. Somehow neither this, nor the general appearance of the field, prepared me for the horrors to follow.

I will probably never know the privilege of competing in the National Ploughing Championships, tractor or horse-drawn. Having survived the cross-country course in Clarinbridge last Sunday, however, I now have some insight into what that must be like, even for a horse.

Speaking of horses, cross-country races often start with an equine metaphor: the so-called “cavalry charge”. Not this time. The expected gallop was replaced by mass squelching sounds as 250 pairs of running spikes sank simultaneously into the ground, interspersed with sucking noises as they tried to get out again.

“Jesus, it’s a bit soft here,” we all thought, looking forward to the first rise in the course, where the ground would surely harden. Instead, when we reached the climb, the muck climbed too. And so it continued.

The squelching was interrupted only by the occasional splash, where the rains had not yet found a vacancy in the soil. Otherwise, mud was general, all over Clarinbridge. Even at the highest point of the course, there was no escape. It was still ankle-deep, just more glutinous.

First came the shocked realisation that there would be seven kilometres of this. Then I went through all the classic stages of bad-weather running: denial, anger, bargaining, a promise to take up golf instead soon, etc. After that, gradually, a sort of acceptance set in.

My shoes stayed on throughout, although I had to scrape so much of south Galway off them at the end, I could have grown potatoes in it

Battling onwards through the quagmire then, I thought of the unfortunates who used to have fight wars in this stuff. No wonder, amid all the horrors of the trenches, it was the mud that drove so many to despair. But on a lighter note, occasionally, I saw competitors who were suffering even more than me. That’s always cheering. Somehow, eventually, I managed to finish.

Runners did indeed lose shoes on the course, at least temporarily. And I hope the organisers counted all the participants in and back, otherwise I’d fear for some of the juveniles.

Remarkably, thanks to the double-knots, my shoes stayed on throughout, although I had to scrape so much of south Galway off them at the end, I could have grown potatoes in it.

As we set out on our journey back eastward Sunday evening, I was still traumatised by my non-Joycean mud epiphany. It was a big relief to get back on tarmac. It was even nicer, a few miles north of Clarinbridge, to see snow again.

1 Boris Johnson: The UK’s new Covid restrictions to last ‘perhaps six months’
2 Further restrictions expected for Dublin if Covid-19 infection rate does not stablilise
3 Deported man says he has lived in airport for months
4 Ten new advisers to junior ministers to be appointed despite previous Government decision
5 Why are men still explaining things to women?
Real news has value SUBSCRIBE