Ireland must take heed of Britain’s cyber woes with Huawei 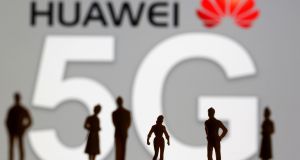 The US, Japan, Australia and New Zealand have all banned Huawei from acquiring contracts related to critical communications networks. Photograph: Dado Ruvic

The recent fallout in the British government over leaks related to Chinese telecommunications firm Huawei’s bid to build the UK’s 5G mobile network has direct implications for Ireland. The firing of defence secretary Gavin Williamson has only served to re-energise a debate on whether giving Huawei effective control over a critically important piece of the UK’s telecommunications sector is a threat to British national security. Britain may well change its mind and choose to bar Huawei from its sensitive communications networks. If it does so, Ireland will face a critical decision on whether to follow London’s lead.

The 2017 Russian-state linked cyber attack on ESB demonstrated how difficult it is to separate cyber attack contagion between the UK and Ireland, including when it comes to critical national infrastructure such as energy and communications. But, compared to the fireworks in Westminster, there has been little in the way of debate in the Oireachtas over the State’s future relationship with Huawei. This is regrettable considering the rapid growth in the scale of the company’s Irish investments, most importantly its commitment to roll out an Irish 5G mobile network and the obvious potential implications for national security and multinationals based in Ireland.

Controversy over Huawei is not new. The company was originally contracted to construct the Hibernia Express transatlantic fibre-optic cable with its landing stations in Nova Scotia and Cork. Completed in 2015, it carries a huge amount of sensitive communications across the Atlantic. Huawei was eventually excluded from the contract after interventions from the US and the British governments.

In response to a request by the European Commission, the Department of Communications, together with the National Cyber Security Centre (NCSC) and the communications regulator, is reviewing the potential risk posed to Ireland by Huawei’s investment in 5G. The US, Japan, Australia and New Zealand have all banned Huawei from acquiring contracts related to critical communications networks. China has dismissed such moves as poorly concealed protectionism. Beijing says that Huawei poses no threat to these countries’ national security.

Unusually for a country that markets itself as a global communications and technology hub, Ireland lacks an advanced signals intelligence agency that can compare with those in many similarly sized developed economies, such as New Zealand’s government communications security bureau. The Government is finalising a cyber security strategy and has set up the NCSC, both of which are very welcome initiatives. But Ireland’s security services lack the authority and capacity to conduct wide-ranging foreign intelligence operations and so have to trust allies to provide them with assessments of external threats to the State. The question over Huawei will boil down to one question: who will Ireland choose to believe?

The United States is unequivocal. Huawei is closely linked to Chinese state intelligence and is a major threat to US cyber security and that of its allies. Any country that gives Huawei access to critical communications networks will see a reduction in US intelligence/law enforcement co-operation. According to media reports, the Central Intelligence Agency has provided European allies with intelligence that shows that Huawei receives funding from China’s national security commission, the people’s liberation army and other Chinese security services. US concerns are also shared by influential voices in London. Tom Tugendhat, the chair of the House of Commons foreign affairs select committee, compared the UK’s decision to allow Huawei to build a 5G network to “nesting a dragon”.

Concerns over Irish cyber vulnerabilities are not limited to Huawei. Ireland is increasingly a location of choice for Russian tech companies, including cyber security firm Kaspersky Lab. Last year a report by the European Parliament called for a ban on Kaspersky Lab products, describing them as “malicious”. Allegations over Russian intelligence links to Kaspersky add to wider concerns over an expanding Russian intelligence presence in Ireland due to the presence of US multinationals.

Cyber security needs to be a constant priority on Ireland’s political agenda. Cyber-related crime in Ireland is already alarmingly high compared to other similar-sized European countries. Intelligence-sharing, including on counter-terrorism and serious crime, depends on the provider of such intelligence being confident that material will be kept secure and not accessed by malicious third parties. If Ireland is perceived to be exceptionally vulnerable to cyber attack then investors may choose to stay away. Cyber security is swiftly becoming the critical test of whether states can successfully maintain and exercise sovereignty in the 21st century.

Dr Edward Burke is director of the Centre for Conflict, Security and Terrorism at the University of Nottingham

4 Colin Farrell: ‘After 20 years of drinking the way I drank, the sober world is pretty scary’