Ireland must help Angela Merkel in her time of crisis 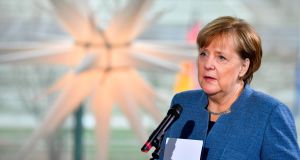 They are the Fine Gael and Fianna Fáil of Germany. Nearly three months after an indecisive general election, we still do not know whether Germany’s chancellor Angela Merkel can lead her Christian Democrats (CDU) into a new government for the EU’s largest and most important country. She has been casting come-hither looks at Martin Schulz, the leader of the Social Democrats, to renew the grand coalition that ruled until September. But Mr Schulz is in no position to immediately reciprocate, because he has to bring his unconvinced rank-and-file with him.

It did not matter much to the EU, or perhaps even to Ireland, that it took nearly 10 weeks for Enda Kenny and Micheál Martin to thrash out an agreement after last year’s election here. But it matters a great deal to Germany, to Europe, and to the world that it is taking so long for Ms Merkel to find a willing partner in Berlin. The delay has exposed the unexpected post-election weakness of her position as she tries to secure a fourth term as German chancellor.

Mr Schulz’s appeals to his party to return to coalition as the junior partner sound ever more plaintive. That is hardly surprising, given the SPD’s bruising experience in the outgoing German government. And he hardly helped his cause with Ms Merkel’s CDU last week when he revived an old and increasingly discredited idea beloved of European federalists – a United States of Europe.

Ms Merkel and Mr Schulz are expected to meet this week to see whether there is any common ground between them. So it is premature to write off another term for the chancellor, who has become the indispensable European leader during her 12 years in power.

Yet the rise of the far-right Alternative for Germany party, which was the big winner in September’s general election, suggests that the stable, centrist politics of Germany that she embodies and which has been a feature of European political life and of the growth and rising influence of the EU for three decades may be in trouble. The EU looks woefully unprepared for that.

It seems like ancient history now, but Ms Merkel came to power – in 2005 – just 18 months after the EU underwent its most profound change since it was created in the 1950s. In 2004, the union expanded eastwards to embrace Poland, Hungary and other formerly communist states. It was meant to be the crowning achievement in the EU’s ambition to heal the wounds of the second World War. As the great historian Tony Judt has argued, that expansive moment marked the end of “post-war Europe”.

Since then, two enormous forces have been unleashed. On one hand, the EU, besieged by the euro crisis which erupted at the time of the global financial collapse, began to coalesce around the euro zone. On the other, and as a consequence, the union has started to crack.

Hungary is under the thumb of the kind of authoritarian regime the EU was supposed to have consigned to history. Greece has been alienated by its treatment during its financial collapse. Spain is consumed by the drama of Catalan secessionism. And the UK is under the spell of a delusion called Brexit. There are also huge external challenges, not least the rise of the feckless Donald Trump and the revanchism of Russia.

German leadership in Europe’s response to these continuing challenges is essential. It has been thrust into this position partly by its economic strength, and also by the weakness of France, its natural European interlocutor. While Germany has had a single leader in the past 12 years, France is on its fourth president in the same period. Emmanuel Macron, elected in May of this year, might turn out to be the great French political leader he wishes to be. But his three predecessors presided over an increasingly introspective and indecisive country.

The weakness of France has been a tragedy for the EU. It has meant that Germany’s power, sometimes decisive and wisely used, and sometimes aimless, is starting to unbalance Europe. True, Berlin does not always get its own way. There is growing resistance among central European states to the refugee policy imposed on the bloc by Ms Merkel’s decision to open Germany’s borders in 2015. Other states, including Ireland, are opposed to steps such as tax and fiscal reform.

Yet Germany under Ms Merkel has been an uncertain great European power. Its strength is that its intentions and actions are benign. Its weakness is that it is isolated at the helm of a bloc, unsure of what its dominance means. Berlin needs not friends – it has plenty of those – but partners. France, under the dynamic but untested Macron, is one. But if Ms Merkel becomes chancellor again, Germany must try harder to become a team player again.

Even if Germany was not embroiled in political deadlock, the EU would be facing stark choices. Institutional reform to bolster the euro and the banks is essential; corporate tax reform is surely imminent, and greater defence co-operation is probable.

Addressing these challenges correctly will require all of us to play ball. We in Ireland are currently asking big favours of our European partners as we try to avoid the worst of Brexit. They have not let us down. Some day we will be asked to return those favours. The twilight of the incomparable Angela Merkel has probably brought that day closer. We must have the confidence and vision to respond in kind.

1 André Leon Talley: How Anna Wintour threw her right-hand man ‘under the bus’
2 HSBC board rethinks overhaul and seeks even deeper cuts
3 WHO warns of potential for ‘immediate second peak’ in Covid-19
4 Archaeologists are ‘quite sure’ they have found Red Hugh O’Donnell’s burial place
5 Tempted by a weeknight barbecue? Here’s how the pros turbocharge their grilling
Real news has value SUBSCRIBE