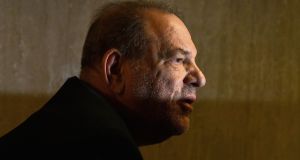 Ireland was a cold, lonely and isolating place. It was before #MeToo and watershed moments like the conviction of Harvey Weinstein in a New York courtroom on Monday. Photograph: Angela Weiss/Getty Images

Boys are the favourite in Ireland. It’s taboo to say, but we all know it’s true.

I was back in Ireland for Christmas and noticed that my mother served all the men first. So Dad gets his dinner (which seemed fair – he’s 75), then my brother-in-law got his plate (okay he’s a guest, still fair). Then my little brother, who’s 10 years younger than me, got his.

This was the first time I’d ever noticed that in our house, the men get served first. I found it mildly insulting. I’ve been living in London for five years now and as a 34-year-old woman I had gotten used to being treated with a certain level of respect.

It felt like I was less important than my younger brother, father and brother-in- law (they even got bigger plates) and that I was transported back to a John B Keane play, or Ireland in the 1950s.

It must be an Irish thing, as just this week singer and TV presenter Coleen Nolan said that it was one of the habits she picked up from her Irish mother and drives her daughter Ciara nuts.

Although I found it strangely hurtful at the time to be so obviously lower down the pecking order, I said nothing as I didn’t want to look like I was coming back from London with “fancy notions” of myself .

The words of men are also put first. This becomes especially odious when it comes to issues of sexual violence

It’s funny the things you start to notice only when you’re out of Ireland for a while. Like this plate thing.

I feel like Lance Armstrong here – “it’s not about the bike” – but it’s not really about the plates. It’s about what the plates mean. That men are put first. And I’m sorry to say that it has more sinister implications than that.

The words of men are also put first. This becomes especially odious when it comes to issues of sexual violence.

When it is a woman’s word against a man’s, you really feel the underlying sentiment.

In Leitrim last week two men were sentenced to seven years in prison for the rape of a former schoolmate at a house party three years ago.

After the sentence was handed down, female supporters of one of the men shouted threats at the victim (after the judge had left the room) saying “you are going to pay for this” and calling the victim a liar.

Sadly, this isn’t an unusual scenario. Before the judge entered a Co Kerry courtroom for a sexual assault trial in 2009, a procession of 50 men queued up to shake the hand of the accused, Danny Foley.

A priest served as a character witness for the defendant and said he hadn’t “an abusive bone in his body”.

The victim was found half-naked beside a skip, covered in bruises, with Foley standing over her. When two gardaí came upon the scene, Foley said he was going “for a slash and found yer wan”, pretending he didn’t know her. CCTV footage showed him buying her a drink in the club, then carrying her to the skip.

I made up my mind right then that I’d never tell another soul and let this die. It was a cold, lonely and isolating place

That was 2008. The same year I had a few too many drinks at a nightclub, I remember being carried down the stairs and woke up the next day in a guy’s house covered in bruises, with little memory of what happened.

I told a friend of mine what happened the next day. Her face turned cold: “Don’t bother telling anyone,” she said, “no one will believe you.” I told another person I was close to, silly enough to think I’d get some sympathy there. “You knew what you were doing,” was her response. I made up my mind right then that I’d never tell another soul and let this die.

It was a cold, lonely and isolating place. It was before #MeToo and watershed moments like the conviction of Harvey Weinstein in a New York courtroom on Monday when the disgraced former movie producer was found guilty of two counts of sexual assault.

Now, thankfully, there’s a much safer space to finally be open about it. This is the first time I’ve spoken about my experience.

People often ask me why I never want to go back to Ireland. I don’t want to be reminded of it. But little things will take me back, every now and again. It’s not about the plates.

Paula Gahan is a writer and comedian based in London