Owen Jones: The old Tory order is crumbling – it’s taken Grenfell for us to really see it

Similar to the collapse of the postwar social democratic contract, the neo-liberal Thatcherite consensus has also been rejected 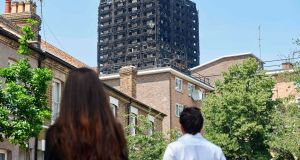 The burned-out shell of the Grenfell Tower block. “The right decry the “politicisation” of this human-made disaster, but to avoid talking about the politics of this calamity is like trying to understand rain without discussing weather, or illness without biology.” NIKLAS HALLE’N/AFP/Getty Images

Britain’s old order is crumbling. Those who sense this most acutely, such as the rightwing press, are its defenders. This week, The Sun was reduced to begging its readers to see the evils of socialism. They are right to panic when 30 per cent of its readers ended up voting for Jeremy Corbyn’s Labour party . Right to reflect that, according to a new YouGov poll, 43 per cent of people believe a “genuinely socialist government” would make Britain a “better place to live” and just 36 per cent say the reverse. Those who represent the future – younger Britons, particularly younger working-class voters – are decisively plumping for Corbyn’s new Labour party.

The political consensus established by Margaret Thatcher’s Tories – neoliberalism, for want of a more sexy word – is disintegrating. It is going the same way as the postwar social democratic consensus established by Clement Attlee, which fell apart in the late 1970s. That model – public ownership, high taxes on the rich, strong trade unions – delivered an unparalleled increase in living standards and economic growth. A surge in oil prices, and the collapse of the Bretton Woods international financial framework, helped bring that era to an end. The death of this political consensus was increasingly obvious at the time: its morbid symptoms were everywhere. Those who wanted to keep it together were powerless against the incoming tide of history. “There are times, perhaps once every 30 years, when there is a sea change in politics,” said Labour’s James Callaghan, days before he was ousted from No 10 by Thatcher . “It then does not matter what you say or what you do. There is a shift in what the public wants and what it approves of.”

The iconic episode that, for the right, summed up the fall of the postwar consensus was the “winter of discontent”. For the ascendant Thatcherites, this wave of public-sector strikes in-between 1978 and 1979 encapsulated the fragmentation of a social order they detested. Here was the chaos and tyranny of collectivism in full pomp. For the new right, it vividly illustrated the need to smash union power and roll back the frontiers of the state that sustained it. The individual would be liberated from the oppressive yoke of collectivism: that was the lesson the widespread strikes taught, or so the rightwing narrative went.

If any episode sums up the collapse of our own neoliberal era, it is surely Grenfell Tower. The right decry the “politicisation” of this human-made disaster, but to avoid talking about the politics of this calamity is like trying to understand rain without discussing weather, or illness without biology.

The Tories are desperately attempting to shore up a system that has engineered the longest squeeze in wages since the Napoleonic wars, with deteriorating public services, mediocre privatised utilities, a NHS plunged into “humanitarian crisis” , and exploding debt. It can’t even provide affordable, comfortable and safe housing for millions of its own citizens. It is incapable of meeting the needs and aspirations of the majority. The right, therefore, is left with a dilemma. It can either double down and make the ideological case for its failings and increasingly rejected system, or it can concede ground. That’s what Labour did 40 years ago. In 1977, Callaghan formally renounced Keynesianism, arguing that the option of “spending our way out of recession no longer existed” , and had only ever worked by “injecting bigger and bigger doses of inflation into the economy”. The Tories may well now try abandoning cuts in favour of investment; but surrendering ground to the enemy didn’t save Labour back then.

There were Tory MPs who believed that rejecting the postwar consensus was desirable but impossible. The electoral success of Thatcherism changed their minds, and they became willing converts. A similar process is now under way in the Labour party. There were also those Tory MPs who believed rejecting the consensus was undesirable even if it was possible: the so-called wets. They became increasingly marginalised within their own party. And then, of course, Labour was forced to accept the underlying tenets of the new social order – just as the Tories once were compelled to surrender to Attlee’s new consensus.

That’s not to breed complacency. Labour’s assumption of power – with Jeremy Corbyn as prime minister – is not inevitable. But the Labour leadership has an extra-parliamentary theory of social change. Passing legislation is important, but they don’t believe society can simply be changed by a few politicians pulling levers at the top. They believe that people in their communities and workplaces should feel collectively empowered and politically engaged.

Nothing scares Britain’s vested interests more than a politicised, mobilised population. Our social order is tottering, but it can continue to disintegrate, with painful consequences, for a long time. A new society intolerant of injustice and inequality can be created. But only the biggest mass movement in Britain’s history can make it so.