How can there be such thing as guilty or innocent HIV? 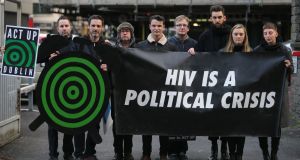 Members of Act UP Dublin LGBT activist group protest outside the Department of Health in Dublin on the eve of World Aids day to highlight the rise of new HIV cases in Ireland. Photograph: Niall Carson/PA

Unique among diseases today, HIV seems to carry its own judgment. It is understood that the condition arises most often from preventable behaviour, especially sex. There is a long history of representations of HIV which associate it with the illicit, with sin. And though most of us today refrain from a cold-hearted declaration that HIV is God’s punishment, in subtle ways we often still think there are “innocent” victims of HIV – and guilty ones.

These ideas profoundly shape my relationship to HIV, not only because of my own condition, but because the virus has touched my life more than once.

I am a cultural anthropologist. Since 1998, I have conducted research in a small village in the highlands of Papua New Guinea. Anthropologists create close relationships with the people whose lives we document. I was adopted into a Papua New Guinean family and have returned on many occasions over the years to live with them and to learn about their social world.

In 2007, I received a photograph of the dead body of a young woman in a letter from Papua New Guinea. It was my adopted sister, Helen. She had died that year of AIDS. Later, when I returned to the village, I learned that Helen had gone to the local town to live and had a relationship with a wealthy man from a neighbouring province. Like many young people with rural backgrounds, she hoped to find a pathway to the modern life people live in towns.

Years later, Helen’s mother told me of her slow death from the disease: her frail body and vacant eyes. We talked about the medications that today can defeat the virus and allow people with HIV to live long and productive lives. If only Helen had had access to those medications, she lamented.

But these were medications I was myself taking at the time. I contracted the virus through a sexual encounter with another man in 2006. I grew up in rural Nebraska and found community and self-expression in the gay community of San Francisco. I was happy finally to feel accepted somewhere and to have opportunities to explore sexuality.

For years, I hid my condition from everyone save my closest friends. I punished myself for making the “mistake” that resulted in infection. I had been an AIDS activist for years and fought against HIV stigma. Nevertheless, deep down I believed that my virus revealed my own weakness or deficient character.

Many of us with the virus struggle with these feelings. Researchers such as Patrick Murphy at Trinity College document that people living with HIV often internalise and reproduce the most punishing messages about the virus. Many people with HIV try to exclude themselves from the category of “guilty” victims by insisting that the circumstances of their infection were exceptional, that they are not like the “others” who contract the virus.

Why should we believe these things about ourselves? Perhaps because the culture tells us they are true. Last year, when Charlie Sheen publicly revealed his status, he attracted intense interest and commentary around the world. As a celebrity, he became a sensationalised symbol of what HIV “means” today: people with HIV are reckless. We are irresponsible and dangerous.

In reflecting for years on these ideas, I draw on my training in anthropology to help understand their function. Our feelings about HIV are intricately linked to our feelings about sex. Associating the negative consequences of sex with shame is a way of controlling behaviour: it is a form of social control. It is a way of silencing the very topic of sex in society, a silence that contributes to the sense that sex is not something to be valued and celebrated as such, but is rather a source of embarrassment.

In order to believe that HIV is shameful, we have to believe that sex is shameful. In tarrying with these ideas, I can think of no other response than to reject the whole system of values that shape them. Instead, I choose to see sex as a valuable form of self-expression and intimacy. Rather than a source of embarrassment, it is instead a source of vitality. If we value sex as such, HIV no longer becomes a sign of something shameful that must be hidden. Instead it is a misfortune that can strike anyone leading a life worth living.

The divisions that should haunt the epidemic today are not those of “guilty” and “innocent”. Everyone everywhere, from rural Papua New Guinea to rural Nebraska, wants to create a life of meaning, purpose, and vitality. But where doing so creates risks, some are more exposed than others. Inequality is the problem that should confront those of us battling the epidemic, not a moribund moralism.

Thomas Strong lectures in the department of anthropology at Maynooth University