Martyrs remind us we must not accept everything deemed socially necessary 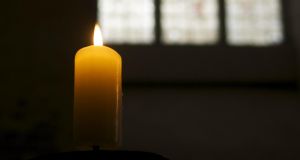 On July 1st, 1681, having been found guilty of high treason for promoting the Catholic faith, Oliver Plunkett was hanged, drawn and quartered at Tyburn, the last person to be martyred in England for the Catholic faith.

He was canonised in 1975 by Pope Paul VI. The 350th anniversary of St Oliver’s appointment as archbishop of Armagh is on July 9th. To mark the anniversary, a statue will be unveiled in St Patrick’s Cathedral, Armagh.

The statue, a seven-foot bronze, has been created by Dublin sculptor Dony MacManus. It is an arresting work, portraying Plunkett in the final moments of his life: his toes are grasping instinctively at the edge of the plinth, and his pectoral cross is accompanied by the hangman’s noose.

In his face, there is both the serenity of faith and the anxiety of flesh and blood.

I spoke to the artist recently, while preparing a piece on the statue for Intercom magazine.

Because this witnessing often resulted in death, in Christian usage martyrdom came to refer specifically to giving one’s life for the truth of faith

When I asked him what struck him most about this, his latest work, MacManus answered without hesitation: “I haven’t done anything this dramatic before; the whole tension of stepping to the edge of life – I’ve never portrayed the actual moment of martyrdom. When you see a figure this size, stepping off a plinth, in the sanctuary of a cathedral, it’s pretty dramatic.”

The commemoration on July 9th will be more than simply a matter of honouring the patron of the See of Armagh: it will be about the significance of martyrdom in Plunkett’s time and in our own.

The word “martyr” comes from the Greek martyrs, meaning witness. In the New Testament, martyria, martyrdom, was the act of witnessing to one doctrine, against a competing one.

Because this witnessing often resulted in death, in Christian usage martyrdom came to refer specifically to giving one’s life for the truth of faith.

The concept of martyrdom may need some rehabilitation in an age in which it has been sullied by being applied to people whose last act was to bring death and terror, to inflict rather than to endure violence.

Martyrdom is not – at least not in the Christian lexicon – a generic matter of dying for religious motives. It is specifically a choice to witness, peacefully, to the truth of the Gospel, even to the point of death.

For most of Christian history, people have been martyred not for what they do, but for what they believe. And since to believe steadfastly is to reject what is contrary to one’s belief, martyrs are usually naysayers, dissenters, intellectual curmudgeons who refuse to buy into what their culture holds to be self-evident.

Martyrs of all eras have rejected core tenets of public doctrine, be that the overtly religious public doctrine of Oliver Plunkett’s time, or the avowedly atheist doctrine that created countless martyrs during the last century.

Here and now, in the Ireland of 2019, public doctrine is camouflaged by the claim that there is no public doctrine, but that all are free to believe as they will, so long as they do not seek to impose.

Yet there are signs of an increasing political will to impose public doctrine on individuals and organisations who dissent.

By highlighting the cruelty of his execution, we renew our commitment to courage in living and professing our faith

We are fortunate to live in a time and place of religious freedom, but increasingly, believers in our culture are called to martyrdom-as-witness. We cannot acquiesce in all that is deemed to be socially necessary and politically legitimate.

Against this background, the creation and unveiling of the statue of St Oliver Plunkett can be read as an act of protest. In continuing to honour a man who valued fidelity more than his own life, we reject a culture of expediencies and alternative facts.

By highlighting the cruelty of his execution, we renew our commitment to courage in living and professing our faith. In recalling his peaceful goodness and his forgiveness of his enemies, we are reminded that our faith is not finally subversive, but that we are called, in the words of the prophet Jeremiah, to “seek the good” of the culture we inhabit.

The unveiling of the statue is open to the general public. It will take place in St Patrick’s Cathedral, Armagh, on July 9th at 7.30pm.