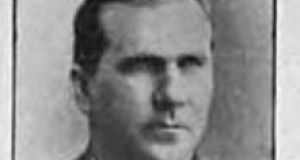 Canon Thomas Magner was murdered by a member of the Auxiliary Division of the RIC as he was out walking near his home in Dunmanway on December 15th, 1920.

Amid the maelstrom of violence with which 1920 drew to a close in Ireland, one of the most shocking events was the murder of an elderly priest, Canon Thomas Magner, as he was out walking near his home in Dunmanway on December 15th. It was a grim postscript to the burning of Cork the previous weekend, or more precisely to the ambush that had precipitated the burning. In this case, the Auxiliaries responsible were on the way to the funeral of a comrade, the sole fatality of that earlier attack.

The cadet who shot the priest (along with a 24-year-old civilian) was later reported to have been a close friend of the man being buried. He had been drinking heavily. And in the subsequent court martial, he was found to have been insane at the moment the shots were fire.

The event was unfortunately timed for the British prime minister, David Lloyd George, who in a statement to the House of Commons on December 10th had spoken of the part that priests could play in a peaceful solution to Ireland’s Troubles.

As reported by the (London) Times, he displayed his “parliamentary mastery” when holding out the prospect of a negotiated settlement. But first the “murder gang” would have to be defeated. And to this end, the Times said, republicans would be given the choice of surrendering arms “either to the military, or (a stroke of genius) to the parish priest”.

Well, five days after Lloyd’s stroke of genius, the parish priest of Dunmanway was walking along the road to Ballineen, along with a farmer’s son named Timothy Crowley, when they met a lorry load of military policemen, en route to the funeral in Cork.

The cadet in charge, one Vernon Hart, stopped the lorry, walked up to Crowley and asked for his permit (the area was under martial law now). He then “started knocking him about” with one hand, pointed a revolver with the other, and shot him dead.

After that, Hart started “talking” to the priest, in such a way that two other cadets dismounted the lorry to approach him, until he waved them back with the gun. He then knocked the priest’s hat off, made him kneel on the road, and shot him twice, the second time fatally.

“He was clean off his head,” a witness said, as recorded by the Times under the headline: “Official report of shooting by mad cadet.” The newspaper noted that Canon Magner had been a “very inoffensive priest”, while Crowley “was a respectable farmer’s son who took no part in politics”.

A local version of the event, as remembered a decade later, is recorded in the Dúchas Schools Collection, the result of a 1930s project in which Irish schoolchildren wrote down the oral histories of their localities.

In Dunmanway’s Scoil Naomh Pádraig, a pupil described Canon Magner’s last moments in the usual neat cursive script, beginning: “It was on the 15th of December 1920. We were after a grey frost.” In a flashback to the month previous, the student then mentions that on November 11th, 1920, the priest had refused a request from the military to mark the anniversary of the ending of the “Great War” by ringing his church bells.

This leads the student to suggest the murder was “concocted beforehand”. As for the shooting, the Dúchas accounts adds the detail that having been forced to kneel, the priest was ordered to say something and that “some people [think] it was ‘to hell with the Pope’.” Instead, he said “O no, no, no”. Then he was killed.

Witnesses to the murders included a resident magistrate, Mr Brady, whose car had broken down nearby. It seems the priest and the farmer’s son had given him a push just before the incident. Brady took cover and escaped.

Questioned in the House of Commons afterwards, Chief Secretary Hamar Greenwood (through a deputy) could not deny that the RM’s house had subsequently been raided by Auxiliaries and that he had been threatened.

As to whether he had been advised by superiors to leave the country, the spokesman could not comment on Brady’s whereabouts except that he had taken leave of absence and was “broken down in nerves”.

Greenwood dismissed suggestions that the other cadets shared responsibility, having failed to intervene. An investigation had concluded they were in no way culpable, he said.

Hart was discharged from the Auxiliaries in January 1921 and committed to “a criminal lunatic asylum”. It is not known how long he spent there, but by 1931, according to online archive theauxiliaries.com, he was living in South Africa. He died in 1937 in Cape Town.