Harry McGee: People Before Profit and the Anti Austerity Alliance - spot the difference 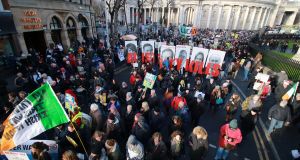 Both parties are Trotskyist and advocate permanent revolution and political agitation through working class mass action in capitalist societies such as Ireland.

The coming together of the two small left-wing parties should have been the easiest graft in Irish politics but has proved to be the most difficult.

For anybody who has not been intimately involved with the Socialist Workers Party or the Socialist Party, you would need to have a PhD in semantics and rhetoric to winkle out the actual ideological difference between them. They are both Trotskyist and advocate permanent revolution and political agitation through working class mass action in capitalist societies such as Ireland.

Sure they came from different routes. The Socialist party grew out of the militant wing of the Labour Party, thrown out by Dick Spring a quarter of a century ago. The Socialist Workers was Trotskyist from the start, closely aligned to a similar movement in Britian.

The Socialist Party, also, did not gave as much respect or support, for example, to Northern republicanism as the Socialist Workers did. It has more antipathy to Sinn Féin, its policies and its motives to this day.

But given that the peace process is two decades in existence, those differences are becoming more difficult to maintain.

Tactical differences have also been apparent in terms of approach. Both parties are revolutionary and see parliamentary politics as one aspect of a wider struggle that involves street protests, mass meetings, and the hard-to-define “people power”. The Socialist Party came out faster and harder from the traps in terms of a ‘won’t pay’ strategy for water charges - but over time both have come to share their views on the issue.

Though this is rarely admitted, the biggest difficulties were presented by personality clashes, and mutual suspicion, with some times bitter antagonism over the years.

Both parties have taken a political ‘nom du guerres’, that has allowed them to be part of a slightly wider entity and take in people who might not be signed-up party members. The Socialist Workers party has campaigned as People Before Profit while more latterly the Socialist Party has become increasingly known as the Anti Austerity Alliance.

Yesterday’s announcement was the culmination of a lot of negotiation and makes a lot of political sense. But it will not be seamless. Both have drank out of this trough before and it left a bitter taste in the mouth for both. They were both part of the United Left Alliance that came together beefre the 2011 election and won six seats, one short of the magical seven that allows speaking and other rights in the Dáil .

The ULA did include a few independents all of whom eventually peeled off. But the big fault-line was in the relationship between the two parties.

A taste of it could be gleaned from this internal SWP memo from 2012: “The space that the ULA should occupy is now the realm of Sinn Fein spokespeople.

“The weakness of the ULA is a product of the sectarianism of the SP and the conservatism of Joan Collins and the (Seamus) Healy group…”We suggested a common ULA strategy for the household campaign but this was shot down as the other components would rather not be tied to the SWP.”

The new entity has registered as a party (with a very unwieldy title) but both parties will keep their own identities and structures. They have identified a number of big common themes as their joint policy platform. They are: water charges, property tax, housing, living wage, reverse of social welfare cuts, debt repudiation; repeal of the 8th amendment; anti-racism; anti-US military.

The registration should allow AAA-PBP a place in some televised leaders’ debates in the forthcoming election, as well as inclusion as a separate entity in opinion polls.

The party will have a rotating leadership arrangement with Richard Boyd Barrett and Paul Murphy alternating for big debates, and in the Dáil.

So what danger of a split? Murphy said the parties have agreed to disagree on some issues but will operate as a bloc. It’s in both of their interests, he has argued, to get to the magical number of seven seat. That will coerce them to stay together.

In some constituencies, there will be two candidates. It’s a risky tactic. In Dublin Bay North for example, both Michael O’Brien and John Lyons will stand for the new party. Sure they will transfer strongly to each other but in the five-seater, others might say the best chances was to choose one.

With Joe Higgins retiring, it has three outgoing TDs and will need to win another four seats. Mick Barry in Cork North Central and Brid Smith in Dublin South Central will be strong contenders. But it’s still a bit of a stretch. The paradox is if all all the TDs associated with the ULA had stuck together, that alliance would now be creeping into double figures.