‘If a new Greek government wins concessions, then Ireland and Portugal would be first in the queue looking for similar treatment and other countries would be looking for leeway in meeting EU targets’ 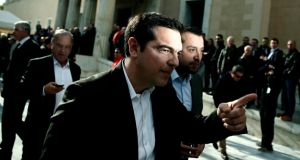 ‘How Syriza does, and what happens if it forms a government, will be closely watched by anti-austerity parties, including Sinn Féin and other left-wing parties here.’ Above, Alexis Tsipras, opposition leader and head of Syriza party. Photograph: Alkis Konstantinidis/Reuters

So, heading for an election, we have a government which argues that the best approach is to stick with the programme and a large section of its opponents, with growing support, saying austerity isn’t working and a debt write-down must be renegotiated with Europe. Sound familiar? Of course this is about Greece, heading for a general election at the end of January after the parliament failed to elect a new president this week. But the parallels with here – and with the political situation in several other European countries – are clear.

The Greek electorate – and those following them to the polls in Spain, Portugal and Ireland – will be told by Europe that they are “nearly there” and that changing course now risks frittering away the hard-won gains of austerity.

Even Greece is showing some economic stability – although after a massive hit – and Irish growth has picked up. But the lack of any lift in general living standards in Europe is undermining the message.

Whatever way the Greek general election falls, it will provide some key markers for our own economics and politics heading into 2015 and add fuel to the growing debate across Europe on austerity.

Can we maintain relatively low borrowing costs for the State if markets get jittery due to events in Greece? Much will depend on whether growth can continue and on the political situation here as a general election approaches.

And here we get into the politics of it. “Ireland is not Greece,” as we have been repeatedly told. And of course Greece, as an economy and a society, is completely different from our own and has suffered massive upheaval. It will nonetheless be fascinating to see whether a public who opted against electing Syriza at the height of the crisis in 2012 will feel free to do so now, perhaps feeling that the risks are now fewer. The campaign will be a debate between fear and dread – fear about what uncertainties Syriza’s policies might bring versus dread about the continued grind of austerity.

If Syriza does win, how hard will it push its talks with Europe? And, crucially, how will Europe react? Talks had already started on funding to keep Greece solvent after its EU-IMF bailout finishes in February, however these will now be put on hold. But sooner or later the new government will need new cash to allow the state to refinance expiring debt and it will need the ECB to keep supporting Greece’s banks .

These are the cards which Europe has to play in the face of any demands from a new government to renegotiate the debts due to the EU, by far Greece’s biggest creditor. Some €200 billion of Greece’s €320 billion national debt is owed directly to the EU. If Syriza does get elected, these talks on debt restructuring – essential as the debt to GDP ratio exceeds 170 per cent – could turn into a game of “chicken”, with a lot to lose on both sides.

Europe could afford to help Greece, but – as ever – will worry about precedents. If a new Greek government wins concessions, then Ireland and Portugal would be first in the queue looking for similar treatment and other countries would be looking for leeway in meeting EU targets.

Whatever happens in Greece, the approach to the crisis led by Brussels and Berlin, based on austerity, reform and modest monetary expansion, is being increasingly questioned. It may have saved the euro, but it seems powerless to bring recovery, with Ireland one of the few euro zone economies showing any kind of growth.

The Greek election will be a key test of whether an anti-austerity “populist” party can gain power and what happens if it does. Later in the year will come the Spanish election, where another left wing, anti-austerity party, Podemos, not yet a year old, is attracting huge support.

Electorates want change, although what this means is not yet clear. Lucinda Creighton’s new party is another attempt to grab this mood for change. Stick or twist is the choice facing electorates and Greece will be the first barometer, not only of how voters will move but also, crucially, of how Europe will react.