Beyond restoring jobs, plan contains little sense of a wider vision for a brighter future 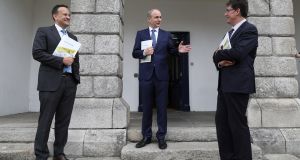 The stimulus package, announced on Thursday, is constructive in that it recognises the necessity of getting people into jobs or helping them stay there.

Other governments have also scrambled to introduce stimulus packages to reduce unemployment rates. Yet, whatever the short-term response is, governments everywhere will have to plan for certain sectors not to recover quickly, and some not to recover at all.

Hospitality and leisure depend on people congregating in groups and sufficient traffic to stay afloat. Only a vaccine will protect these sectors and, by the time it arrives, many individual businesses will have failed. The IMF’s prediction that the Swedish economy will decline by more than its Nordic neighbours, despite its laissez-faire approach to the lockdown, only demonstrates how much anxiety about the virus influences current consumer behaviour.

In the context of global recession and this public anxiety about the future, the Irish Government’s stimulus response is also underwhelming. It is less ambitious and visionary than policy proposals in other countries facing a worse economic and public health crisis.

For example, the Biden campaign in the US and a campaign in the UK driven by hundreds of civil society organisations and academics (as well as Trócaire here in Ireland) have adopted the slogan “Build Back Better” from the UN Sendai Framework for Disaster Risk Reduction. The slogan refers to developing greater resilience after a crisis through new policy initiatives. Public investment should correspondingly go beyond temporary fixes to envisioning how improvements in infrastructure, human capital and collaboration at a community level can prepare a society for future shocks.

The pandemic has affected the US and the UK more than Ireland, and the Government here should be lauded for acting quickly. Those countries are also confronting the divisiveness of political polarisation and the repercussions of decades, if not centuries, of racism and oppression. Those two trends are fuelling confrontation between political leaders and on the street.

But these differences do not mean that policymakers in Ireland can avoid thinking about social and political divisions here, and the longer-term policy vision needed to overcome entrenched structural problems, such as low pay and precarity. Like the US, the UK and elsewhere, the fault lines in Irish society have been exacerbated by the pandemic, and recession and will not go away without new policy ideas.

In fact, there are two lessons the Irish Government should take from the US and the UK. The first is that a slogan such as “Build Back Better” evokes a brighter future, and implicitly tells young people to aspire and to trust that leaders are looking after their interests. The second, based on the friction caused by the “cancel culture” debate or perceived hardening of ideas amongst progressives, is that the Government has to connect open public debate to transformative economic and social policy. The victory in the Apple tax case represents in some ways the first foray into this debate. We should debate whether the status quo really represents effective economic policy for a small, open economy in a volatile world or, instead, if we should be engaging in more far-reaching and forward-thinking discussion about the economy we need for the future.

The package could have hinged on linking job creation to wellbeing, climate change and economic democracy

The stimulus package and the recent rejection of the Private Members’ Bill on protecting low-wage, precarious workers that the Social Democrats put forward suggest that the Government is pursuing the former strategy – to create jobs first and consider their quality later. Yet, considering the combination of external pressures and internal problems policymakers must confront over the next few years, a bolder, more visionary alternative would also be more pragmatic. Waiting for the emergency to pass – as this stimulus package seems to be predicated on – may only make the long-term challenges more daunting.

This first economic litmus test for this new Government fails to impress because it does not give the sense that the new FF-FG-Green alliance is prepared to think big enough to move beyond Covid-19 to a new normal that is predicated on equality, and – more profoundly – hope for the future.

Instead of generating jobs for the sake of employment numbers, the stimulus package could have hinged on linking job creation to wellbeing, climate change and economic democracy.

Policy planning for the future should therefore not just aim to return people – very often women – to low-paid, precarious positions, but rather to better jobs that reflect recognition of the collective benefit of a more stable, more optimistic workforce. Critically, younger generations would feel like they have a stake in such an economy, where they can perceive a trajectory for themselves instead of a narrow, and sometimes depressing, set of choices.

The Government has a strong basis and mandate following the last election and the impact of Covid-19 for moving in this direction. During the pandemic, politicians asked us all to engage in a collective effort to care for each other. Improving the quality of work in sectors such as care, or renewable energy or any other sector that suggests responsible future planning, shows that the State recognises that to build a better Ireland, investing in economic recovery has to be good for society as well. This stimulus package aims to fulfil half this brief but the other half remains just as important.

Shana Cohen is director of TASC, the think tank for action on social change

5 I got rid of 95% of my stuff, almost everything I’ve ever owned