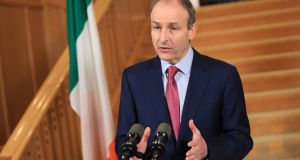 Given the nature of the task, most people around Government seemed to think that Micheál Martin had done a passable job in his address to the nation on Tuesday evening conveying the well-leaked decision to prolong the lockdown until at least early April. At least, one observer noted, he spared us the seanfhocail on this occasion. Well, we should be grateful for small mercies.

The extension of the lockdown and the announcement on Tuesday came after a week of comically bad communications from the Government, demonstrating again its ability to make things as difficult as possible for itself. This topic was taken up with some gusto at parliamentary party meetings of the two large Government parties on Wednesday night, just as word of the Irish Times/Ipsos MRBI poll – which counted an aggregate eight-point fall for the dynamic duo – began to chirp and buzz on TDs’ phones. Participants reported that the breaking news did not lighten the mood.

TDs, like everyone else, are chafing at a further lockdown, even if they largely accept the Government’s rationale for it. But they are clear about their impatience, too. Assuming – it is a big assumption, but a justifiable one – that cases continue to fall, deaths decline and pressure on the hospital system eases, there will be strong political pressure from Fianna Fáil and Fine Gael TDs for reopening social and economic life in April and May.

The evidence from the Irish Times poll suggests that most of the public are in roughly that space, too. They want the elderly and vulnerable to be vaccinated as quickly as possible, and once that’s done they want a careful reopening to start. Schools (driven by parents) and construction (driven by young people, most exposed to the housing shortage) are their priorities. This underscores again the importance for the Government of getting the vaccination rollout right.

The private views of some sensible people in and around the Government – which express some confidence it can ramp up to a million jabs a month and more – are at odds with its rickety public image of late. But nothing is more important for the future of the administration than getting vaccination right. Martin’s address on Tuesday night – laying out specific numbers by specific dates – copperfastened that.

Such is the confidence within the Government that the vaccination programme will deliver that there is already a very lively discussion behind closed doors about the pace of the subsequent reopening. From what I can gather from absolutely everyone, you can expect Cabinet-Nphet tensions to surface again in the coming weeks. Nphet has resisted a push to reopen construction, though the Government pressed them on the schools. Push and pull.

As the acute phase of the crisis and the associated threat to the health service passes, such choices will have to be made: this is the business of government, the responsibility of power.

But this Government will soon face choices above and beyond reopening. The drumbeats of fiscal reality are growing louder in Merrion Street, as evidenced by the unusually clear warnings in the Covid plan about the unsustainability of current spending on Covid supports for business and workers.

Worth quoting: “The domestic tax base is not sufficient to cope with this amount of spending beyond the very short term . . . In order to ensure fiscal sustainability, therefore, it will be necessary to roll back these temporary expenditure measures once vaccine rollout has progressed and the economy reopened.” That is going to be anything but painless.

Though it seems a million miles away, the crisis will pass, and life will return if not to normal, then to a form that is not completely dominated by the pandemic. Politics will resume. And the Government will have to govern.

Some people in the administration get this. So despite a chorus of “What is she doing that for?” around last weekend, Minister for Justice Helen McEntee signalled an initiative to reform the licensing laws. She understands that the current very strange period of politics will change, and perhaps – hopefully – will change quite soon. “We will have to start doing stuff,” asserts one insider.

As to what that politics looks like, that’s up for grabs. Counterintuitively, this week’s poll depicts a political landscape that is not all that different to a year ago – with the exception that a goodly chunk of Fianna Fáil support has leached to Fine Gael. Though if you think, as many of their opponents do, that they comprise basically the same conservative political force, I guess that doesn’t really matter.

There are good reasons to believe that the pandemic will change politics. Whether it changes party politics seems to be – on the evidence so far – another question.

That there has been a shift of the political centre of gravity to the left is undoubtedly true. But as often happens in Ireland, that is manifested as much in a change of approach in Fine Gael and Fianna Fáil as it is in a surge of support for left-wing parties. Their ideological pliability is one of the reasons their duopoly lasted so long. The two old centrist (centre-right/centre-left/fight-about-it-among-yourselves) parties have presided over an expansion of the state of which the most avid left-winger could hardly have dreamed 12 months ago.

The question is what they do next, as the pandemic recedes and questions about paying for this expanded state become more urgent. You can have whatever view you want on how the bigger state should be paid for; but you can’t dispute that it will be more expensive than what went before. And in the real world borrowing €20 billion a year ad infinitum is not a solution, I’m afraid. Someone’s gotta pay. And that’s a fact everyone – Government, Opposition, public and lobby groups – won’t be able to avoid forever.