George Hook should be challenged, not silenced 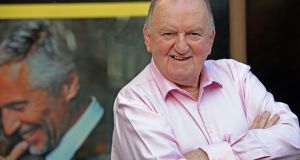 What George Hook said about rape was abhorrent and unforgiveable. Growing demands, however, that he be publicly shamed, silenced and cast out do little for women, or our daughters.

I was on a day off last Friday, driving to the supermarket (a woman’s work is never done), when he made his awful comments during his High Noon programme on Newstalk.

My initial reaction was righteous indignation at his suggestion that a woman should not go home with a man she had just met, for sex, in the same way, I inferred, Hook felt a man could.

“We women like sex too you know,” I thought, as I railed at his old-fashioned double-standards.

It was what he said next that appalled me.

“But modern-day social activity means that she goes back with him. Then is surprised when somebody else comes into the room and rapes her. Should she be raped? Course she shouldn’t. Is she entitled to say no? Absolutely. Is the guy who came in a scumbag? Certainly. Should he go to jail? Of course. All of those things. But is there no blame now to the person who puts themselves in danger?”

To imply that any woman – or man, or child – be held responsible for being raped or assaulted is not only offensive; it is dangerous. It gives succour to the view that people who experience this violation are somehow culpable, and that those who rape or assault could be, on any level, excused. It can never be repeated too often – the only person responsible for rape is a rapist.

Those who have called Hook out, including the Dublin Rape Crisis Centre (DRCC) and the National Women’s Council of Ireland, are 100 per cent correct to do so. High Noon’s former sponsor, Dalata Hotels, made the right commercial decision by severing its connection.

As Noeline Blackwell, chief executive of the DRCC said, victims of sexual assault should not be made feel they might be partly responsible. It was not a woman’s responsibility “to find places where they are safe from rape”.

Hook’s comments have caused huge pain to people with direct experience of sexual assault. One tweet in my feed this week said: “I spent half an hour sobbing in my husband’s arms last night about something that happened when I was 14. Hook cut these old wounds open.”

On Monday afternoon, Hook read an apology during which, to my ears, he sounded full of both remorse and shame. He sounded like he got it. He sounded shellshocked and it appeared that he had thought about and appreciated the implications of his words three days earlier.

“It was wrong of me to suggest that any blame could be attributed to those victims or that they bear any responsibility in the crimes committed against them,” he said. “By doing that I played a part in perpetuating the stigma and I unreservedly apologise for doing so.”

Not good enough. News later that day that a number of Newstalk staff had circulated a letter demanding Hook be fired was greeted with glee on social media. “Yes”, “about time” and “good riddance” were among the comments.

Oh, that we could so easily say “good riddance” to the views he had articulated. He spoke, unfortunately, for many, and not just white, well-off men in their 70s.

My 15-year-old daughter has described the “rape culture” she sees among her peers. She describes how teenage boys brag of having had sex with drunk girls at the last “sesh”; who feel no fear in grabbing girls’ breasts or buttocks as they pass, or, who refer to one girl in her circle not by name but by “34DD”.

Such views are underpinned by a society that politically and economically disadvantages women and girls, in the workforce – as exemplified by Newstalk’s male-only schedule between 7am and 7pm Monday to Friday; in politics; and in a Constitution that denies us the right to decide what happens to and in our bodies.

Views, behaviours and individual that contravened the moral hegemony of 1930s, 1940s and 1950s Catholic Ireland were publicly shamed, silenced and cast out by the thought police of the time. Abhorrent views were censured, stymieing intellectual and social development for decades.

Ireland is, thankfully, a different place now. Some would say our treatment of women has changed radically, but have our underlying social and political attitudes changed so much?

Today’s thought police see themselves as very different to those of 70 years ago. Their agenda is freedom and safety for women and girls.

However, the abhorrent and deeply damaging views of women and girls, articulated by Hook, teenage boys, and our Constitution alike, must be heard. They must be challenged. They must be changed. Simply silencing them will not achieve the safe, free world we want for our daughters.

1 Why you still can’t have a European holiday this summer. Or can you?
2 Donald Trump’s political success is based on racism
3 David McWilliams: We won't have another 1980s-style recession
4 Oliver Callan: ‘I was a perfect candidate for exploitation’
5 The night shift: ‘In 38 years, I’d never seen an owl in the city centre’
Real news has value SUBSCRIBE