Still Life With Liffey – An Irishman’s Diary about art, literature, and internet celebrity 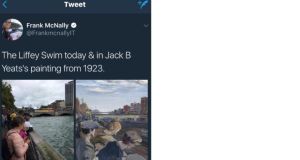 Readers will have to excuse me this morning. I’m still slightly viral as a result of something I picked up during the Liffey Swim last weekend.

No, I wasn’t in the actual river. I just happened to be cycling past as the men’s race got under way, and stopped to take pictures on my iPhone.

Then, around Bachelor’s Walk, it occurred to me to try and recreate the angle of Jack B Yeats’s 1923 painting of the event.

Sure enough, I found one that also included a few spectators with caps (baseball mainly), a warped echo of the 1920s, and posted the result on Twitter.

Shortly afterwards, thanks to the likes and retweets, I was officially “trending in Dublin”.

The effect has worn off now, more or less. But for several days there, my children were treating me with something like respect. It has all been very head-turning.

Maybe now I’ll be tempted to compete in the race next year, although that would involve learning to swim first.

More likely, I’ll continue to observe the event from the safety of the quays, as Yeats did.

The Liffey Swim today & in Jack B Yeats's painting from 1923. pic.twitter.com/ydC1ZoJSd1

After all he famously won an Olympic medal (silver) for his efforts, at the Paris games of 1924, when sports-themed art was among the disciplines.

That was the first Olympics at which independent Ireland competed. And it was doubly remarkable in that the only other event in which we claimed a medal was also artistic – Oliver St John Gogarty picking up bronze in literature for his Ode to the Tailteann Games.

It made for a bright start to the new State’s life, following the Nobel Prize the other Yeats (WB) had won in 1923. But that was still a dangerous time – a fact illustrated by the aforementioned Gogarty, and a very different kind of swimming event in the river Liffey earlier that year.

As a pro-Treaty senator during the Civil War, Gogarty earned the enmity of hardline republicans. And one night in January, he was kidnapped and brought to a place in Islandbridge, where he formed the strong impression that he was about to be shot.

So on the pretext of needing to relieve himself (which he probably did), he escaped his captors long enough to dive into the river and stay underwater in near-freezing temperatures until reaching the far side and safety.

A year later, in gratitude to the Liffey “goddess”, he returned to present two swans to the water. Their descendants may still be swimming it today.

It was a breeding pair of a rather different kind that James Joyce invoked when making the river a central feature of Finnegans Wake.

Joyce had already immortalised Gogarty as Buck Mulligan in the opening sentence of Ulysses, a compliment Gogarty did not entirely appreciate.

But the intro to the Wake is dominated by the Liffey. And, since the book is an attempt to encapsulate the story of the human race (in general, that is, not the human race that happened in the river last Saturday), he also mentions Adam and Eve.

He could do this via Adam and Eve’s Church, as Dubliners call it, which is on Merchant’s Quay, or about one-third the way into the annual swim.

Officially it’s the Church of St Francis of Assisi, but the popular name derives from, of all things, a pub.

Back during the Penal Laws, entrance to forbidden Masses was via an alleyway that also housed a tavern called Adam & Eve’s. This in time became a password. When challenged at the entry, Catholic worshippers would say they were going to “Adam & Eve’s”. The name stuck.

But for various reasons, the better to excavate their layers of meaning, Joyce reversed the names, so that his opus begins: “riverrun, past Eve and Adam’s...”  I’m told by those who spend their lives studying this strange masterpiece that among the intended puns there is a reference to “Pa” and “Steve(a)n”. This is because, within weeks of each other around the New Year of 1932, Joyce’s father died and his grandson Stephen was born – a coincidence he also mentioned in a poem.

So whereas my then-and-now Liffey montage was intended to suggest the continuity of life over a mere 94 years, Joyce’s epic describes the endless cycle of death and rebirth since the dawn of humanity. I really must knuckle down soon and join the select minority to have read it.

In the meantime, I estimate that number to be considerably fewer than those who “liked” my picture on Twitter.

1 Irish tourists excluded from visiting Greece as country begins its tourism season
2 We need to pay very close attention to what is happening in Britain now
3 Remaking Ireland: Five positives from the pandemic
4 50 things to do in Ireland this summer
5 Connell losing touch with the club championship is the real tragedy of Normal People
Real news has value SUBSCRIBE