State of the EU: Looking to the post-Brexit future

For the first time in a decade, Juncker’s trademark bullishness has some justification 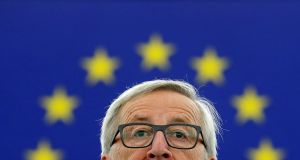 In a wide-ranging state of the union speech that encompassed everything from refugee policy to Slovakian fish fingers, Jean-Claude Juncker pointedly made room for just a passing reference to the European Union’s impending loss of one of its biggest member states. Brexit would be “a very sad and tragic moment”, the president of the European Commission told MEPs in Strasbourg.

In treating that historic event as a brief aside, Juncker was reflecting the fact that continental leaders have by now fully reconciled themselves to the UK’s departure, but he was also conveying a message: the EU, confidently facing the future, refuses to be defined by Brexit. “The wind is back in Europe’s sails,” he said.

For the first time in a decade, Juncker’s trademark bullishness has some justification.

The EU is in the fifth year of an economic recovery that has finally reached every member state, albeit to varying degrees.

Its economic growth has outpaced that of the United States for the past two years and unemployment, while still far too high in many European countries, particularly among young people, is at a nine-year low overall.

The union has managed to weather the euro zone and migration crises with its institutions intact, and the right-wing populist wave has receded for now.

Brexit itself, while depriving the union of the UK’s economic power and diplomatic clout, will also, by removing a semi-detached member that always stood at a remove from the integrationist centre, make the union more coherent.

That poses risks for the Irish Government, which has for decades found it strategically useful to let the recalcitrant British hold the line in areas such as trade and tax, but for true believers in the EU as a political project, Brexit is a big opportunity.

The priorities identifed by Juncker are a useful attempt to marry principle with practical steps that would benefit European citizens. He spoke of strengthening the trade agenda, making industry more competitive, leading the fight against climate change and protecting Europeans in the digital age.

He stressed the EU’s role as a moral leader, a position vacated by the US under Donald Trump. Last year alone, EU states took in three times as many refugees as the US. “Set against the collapse of ambition in the United States, Europe will ensure we make our planet great again,” Juncker said on climate change.

If those claims to values-based global leadership are not to ring hollow, however, the EU must ensure its own house is in order. The authoritarian slide in Hungary and Poland must be recognised as a systemic threat to the European project and confronted as such.

And with right-wing populism set to remain a force for years to come, the union has to reckon with the economic forces behind it while refusing to allow nativist impulses threaten the principle of solidarity or close the door to future enlargement.