An Irishman’s Diary on the national talent for swearing 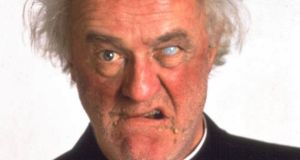 On a plane home from Brussels last week, I found myself sitting in front of one of those Irish people who curses all the time.

Not ancient, poetic curses, like “may your right ear wither and fall off into your left pocket” or “may a cat eat you and may the devil eat the cat”. That might at least have been entertaining (on a very short flight).

No. This was just constant use of the f-word, for no reason. And it wasn’t “feck” either, which we as a people have decided is a polite, even charming swear word, and which, thanks to Father Ted, we have successfully exported to England.

No, this was the original Anglo-Saxon f-word, which the English off-loaded on us.

Now, if the man behind had used it less frequently – say, in every second sentence – I might not have noticed. But except for his very shortest utterances (I think he sneezed at one point and said “Excuse me” without adding a “f***”), he dragged it into every phrase at least once. Twice if he was using sub-clauses.

When I finally sneaked a glance at him, somewhere over Cardiff while pretending to adjust my seat, I confirmed he was middle-aged: maybe 50-something and portly, but of an appearance that did not suggest anger or obvious discontent.

And that’s the way he sounded. At worst, he came across as a man who was a bit under-impressed with the world. But he didn’t use his f-words with any feeling, really. They were just inserted at regular intervals, usually in places where English people or Americans would put an adjective.

His partner in conversation, meanwhile, didn’t swear at all. Yet their 100 per cent disparity didn’t seem to bother either man. It bothered me after a while.

By the time we’d crossed Wales, it felt like I was having the back of my seat kicked continuously.

I was this close to turning around and asking: “Have you noticed that you use the f***ing f-word in every f***ing sentence? Because I f***ing have. And it’s becoming a bit f***ing wearing now.”

But then they announced we were beginning our descent into Dublin, so I didn’t say anything.

I don’t think I’m prudish, and I know the traditional concept of “bad language” is displaced. The real bad language usually occurs in official reports, political statements, boardroom jargon and other ostensibly polite environments where convoluted terminology is used to disguise rather than reveal.

And at least swear words can be funny, sometimes, as Roddy Doyle has demonstrated through his Joycean mastery of Dublinese. At the right moment, a phrase such as “ask me b*****ks” can be both more entertaining and communicative than the Anglo-American alternatives of “not a chance” or “no way (José)”.

But where does the dead, unthinking use of f-words come from? It’s at least as common in Ireland, and it doesn’t suggest rebelliousness, or a sense of fun, or any of the other excuses we usually advance.

It certainly doesn’t suggest the rich vocabulary we’re supposed to have.

I’m tempted to look for an explanation in the loss of the mother tongue which has perhaps left us bereft in some way that requires random insertion of f-words in speech, although I’ve never heard that argument advanced by experts.

It’s true that, even if devoid of meaning, the terms can sometimes add weight or rhythm to a sentence. I noticed, for example, that my neighbour on the plane occasionally broke into iambic pentameter thanks to swearing.

“He’s an awful f***in’ man for the drink,” he said at one point, and “I see he has a f***in’ horsebox now”. But the effect wasn’t exactly poetic. And anyway, that wouldn’t explain f-words as a coping mechanism for the loss of Irish.

Swearing is part of what we are, clearly. So much so that emigrants often affect to miss it when abroad, along with Barry’s Tea and Tayto. (By the way, can I just say here – quietly – that Tayto is a bit over-rated? So shoot me.) But it’s not nearly as charming, most of the time, as we like to think.

I wonder what Oscar Wilde would have made of the habit.

I thought of him in the Dublin Airport baggage hall, where the sweary man passed me, with his friend. The last thing I heard him say was: “I suppose they just want to get the f*** home, like everyone else.” Then he exited through the Blue Channel. He had f***ing nothing to declare. @FrankmcnallyIT

1 Restarting Ireland: When and how will we ‘get back to normal’?
2 Coronavirus: Trump warns of ‘a lot of death’ in United States next week
3 An ‘Asian flu’ pandemic closed 17 Dublin schools in 1957
4 Mary Lou McDonald: This crisis shows that Sinn Féin was right
5 Coronavirus lockdown steps could remain into winter, says expert
Real news has value SUBSCRIBE