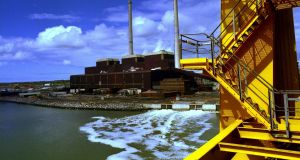 On the ESB’s Moneypoint coal-fired power station – Ireland’s largest source of carbon dioxide (CO2), with emissions of 4.7 million tonnes per year – a decision on replacing it with some alternative, low-carbon fuel will taken “before 2020”, even though the plant is 40 years old.

For all the headline stuff about moving towards full “decarbonisation” of the energy sector in the long term, the White Paper – Ireland’s Transition to a Low Carbon Energy Future 2015-2030 – provides no clear road map.

One would expect a White Paper to be full of clarity and firmness of purpose, unlike a Green Paper, which discusses issues and puts forward a series of options to address them.

In effect, what Minister for Energy Alex White has produced is a Green Paper.

The pledge to reduce energy-related carbon emissions by between 80 and 95 per cent, compared with 1990 levels, by 2050 is impressive. But it is well outside the paper’s 15-year timeframe, as is – even more so – White’s aim to make the energy sector carbon-free by 2100.

As Friends of the Earth Ireland noted, the 90 “actions” identified in the document “don’t match the scale of the ambition or the urgency of the challenge”, while the notion that communities would become “agents of change” in the energy sector is nothing if not aspirational.

One of the main reasons why so many communities in rural Ireland are opposed to wind turbines is they feel these flagships for renewable energy are being foisted on them, without consultation, by private firms benefiting from generous public subsidies.

If renewable energy is to be accelerated, as the White Paper envisages, it can only mean more wind farms – most of them onshore, rather than offshore – and these are likely to run into strong opposition, not least because they can still be located just 500m from homes.

But some concession on this fractious issue is needed.

While it refers to the importance of having an “evidence-based approach” to future energy options, the White Paper contains no cost/benefit analysis or strategic environmental assessment on wind energy, even though neither has yet been carried out, as anti-wind campaigners complain.

It also kicks to touch on shale gas “fracking”, which could generate even more intense opposition.

The document merely refers to a current study examining its potential impacts – commissioned by the Environmental Protection Agency – expected to be published in 2016.

In the meantime, no applications proposing the use of fracking would be considered “in advance of analysis of the research findings”, while any policy decision “will be taken in the context of the objective of achieving a low-carbon energy system in which the use of oil and gas is gradually curtailed”.

On the ESB’s Moneypoint coal-fired power station – Ireland’s largest source of carbon dioxide (CO2), with emissions of 4.7 million tonnes per year – a decision on replacing it with some alternative, low-carbon fuel will taken “before 2020”, even though the plant is 40 years old.

In other words, it is reaching the end of its useful life. And the Minister must know closing Moneypoint – or, more realistically, converting it to run on a less carbon-intensive fuel such as biomass or gas – would be the biggest single hit in terms of cutting Ireland’s CO2 emissions.

Nuclear energy is not even discussed as an option, with the White Paper noting that it is “currently prohibited by legislation”.

On using energy more efficiently, the document notes research showing that it has the potential to deliver significant energy savings – although “this will demand more extensive measures than have generally been implemented so far, including deep retrofit of existing building stocks”.

All it promises, however, is an “affordable” regime of “financial and advisory supports”, without specifying any particular measures.

“Ultimately, it will be decisions by individuals that will make homes warmer, businesses more competitive and public services more cost-efficient,” the White Paper says rather lamely.

1 Why are there so many angry dads?
2 Coronavirus: Warning against blame game as 46 more cases are confirmed
3 Two people die after car plunges off road and overturns in river
4 ‘I’m pretty sure that if I had been somewhere else they would have just let me die’
5 John Hume, architect of peace process, dies aged 83
Real news has value SUBSCRIBE