Four known unknowns of the cost of Irish unity 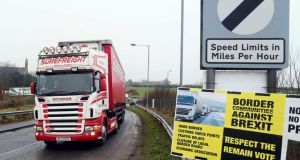 “Political or economic disruption as a result of Brexit may lead to [a border poll] occurring sooner rather than later.” Photograph: Paul Faith/AFP/Getty Images

The issue of Brexit has put the question of the constitutional future of Northern Ireland at the centre of public debate. Even without Brexit, continued demographic changes in Northern Ireland make it look increasingly likely that a border poll will arise at some point in the future. Political or economic disruption as a result of Brexit may lead to this occurring sooner rather than later.

For an informed debate on an issue of such national importance, it is critical that assessments of the implications of Irish unification for citizens in both parts of Ireland are both credible and realistic. The reality is that the ultimate cost (or benefit) of unification to the Republic’s taxpayers would depend on several factors yet to be determined.

Any transition must be sufficiently long to allow a gradual transfer of powers and the introduction of new policy approaches needed to make unification work. In this context a second unknown is the relative role of both governments during any transition period in addressing Northern Ireland’s low productivity, through reforms in educational, industrial and regional policy, and the success of such policies.

Northern Ireland’s relatively low productivity is likely to be driven by a number of factors including a widening gap in educational attainment, lower intensity and poorer quality foreign investment, lower levels of exports and a lack of effective regional policy. It is an open question as to whether Northern Ireland’s poor productivity performance would be more effectively addressed in a united Ireland.

The third factor relates to negotiations on debt and assets that are attributable to Northern Ireland. In terms of citizens in the Republic, a central concern would be the additional cost of running Northern Ireland under unification. The level of subvention, which refers to the gap between government spending and tax revenue in Northern Ireland, is often focused on as a measure of this cost. Subvention in 2014 was £9.16 billion. However, when items of expenditure not directly related to the running of Northern Ireland are subtracted, for example its contribution to UK defence spending or UK government debt, potential subvention levels could fall by about 25 per cent.

The level falls further when account is taken of UK public-sector pensions and contribution-based old-age pensions, both of which would remain a UK liability following unification. Negotiations on Northern Ireland’s share of UK assets may also impact the figure in the event of unification.

Nevertheless, it is Northern Ireland’s low productivity levels that create a need for subvention payments in the first place, and the ultimate cost (or benefit) to the Irish taxpayer would depend on the success of policy reforms aimed at addressing this problem.

The final unknown aspect is the role of key external players such as the European Union and the United States in, potentially, helping to reintegrate Northern Ireland back into the EU following Brexit and encouraging increased levels of foreign direct investment into the region.

Any credible assessment of the cost of unification should incorporate reasonable assumptions around all of these unknown factors under various scenarios. There is little to be achieved through a static analysis of Irish unification whereby the estimated current costs of administering Northern Ireland, which are themselves highly debatable, are simply superimposed on the current tax and welfare systems of the Republic. Such a scenario would never seriously be proposed, or ratified, in any border poll.

Responsible debate on the economics of Irish unification should be based on facts that have been established through rigorous research that fully accounts for the likely dynamics associated with any unification process. What we must avoid at all costs is a repeat of the UK Brexit referendum, which is best characterised as a scenario of spurious claims and counterclaims that led, ultimately, to sustained political and economic stalemate.