Fionola Meredith: Pastor McConnell had the right to make nasty comments about Islam

Revulsion at McConnell’s rant gradually became secondary to the need to protect and uphold the fundamental right to freedom of expression. 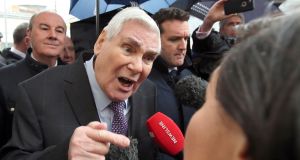 Pastor James McConnell leaving the magistrates court in Belfast on January 5, 2016 after being found not guilty of making ‘grossly offensive’ remarks about Islam. The judge said while he considered the remarks offensive, he did not consider them “grossly” offensive under the law. AFP PHOTO / PAUL FAITHPAUL FAITH/AFP/Getty Images

The bizarre trial of elderly Belfast pastor James McConnell has ended with the right verdict: not guilty. His attack on Islam – made from the platform of his Pentecostal super-church, Whitewell Metropolitan Tabernacle, from which he has since retired – was nasty, lurid and ignorant.

All that wild-eyed fulminating about Islam being “heathen”, “satanic”, “a doctrine spawned in hell”, and Muslims being untrustworthy, sounded ludicrous and deeply offensive to most reasonable ears. It riled Dr Raied Al-Wazzan of the Belfast Islamic Centre enough to make a complaint to the police. Al-Wazzan described the sermon as “disgraceful and disgusting”.

Curiously, however, the resulting prosecution was not based on hate crime legislation; rather, McConnell was charged with sending “a grossly offensive message” under the Communications Act 2003.

Like many surprisingly tech-savvy evangelical Ulster preachers, McConnell had automatically uploaded his sermon to the internet, to be shared with the wider world, and it was this act – not the words themselves, spoken in the relative privacy of his church – which led to his appearance in court.

This is what undermined the credibility of the prosecution. It began to look like a show trial, a determination to censure McConnell no matter what, using an odd legal technicality if necessary. Yet 78-year-old McConnell – no stranger to the arts of showmanship himself – was clearly rejuvenated by the drama of it all, not to mention the thrilling possibilities for public martyrdom, and spoke stoutly of going to jail for his faith. With a flourish, he turned down the offer of an informed warning from the police.

Amid the hubbub, it emerged that Al-Wazzan, who had been intended as the chief witness for the prosecution, had publicly praised the rule of Islamic State in Iraq.

The revulsion many of us felt, and still do feel, at McConnell’s rant gradually became a secondary consideration to something far more important: the need to protect the fundamental right to freedom of expression. The verdict, when it came, was in keeping with that shift in opinion.

Finding the pastor’s remarks offensive, but not “grossly offensive”, the judge said “the courts need to be very careful not to criminalise speech which, however contemptible, is no more than offensive. It is not the task of the criminal law to censor offensive utterances”.

Exactly. Yet if McConnell been tried under the Republic’s controversial blasphemy legislation, the result might have been very different. Naturally, there is concern the verdict opens the way for further outbreaks of inflammatory speech . After all, we still don’t know what, precisely, marks the distinction between “offensive” and “grossly offensive” utterances or communications, and there will always be people who test those unspecific limits.

With his 17th century Calvinist rhetoric, full of demons and hell-spawn, McConnell is a relic of an even earlier time. Today, a powerful spirit of conformism, policed by social media and occasionally backed up by the actual police, ensures objectionable views like his are kept largely submerged.

This does not mean we are any more open-minded, enlightened or tolerant; merely that most of us have chosen to play by the rules.

1 Seán Ó Fearghaíl re-elected as Ceann Comhairle of the Dáil
2 How much coffee should I drink? How much is too much?
3 Six Nations: Ireland v England all you need to know guide
4 Love Island: Since Caroline Flack’s death it has become utterly unwatchable
5 Legionnaires’ Disease case: Spas should ‘be alert to dangers in water’, says woman
Real news has value SUBSCRIBE