The Brexit position paper feels more like an early move in the blame game than a credible plan. But this is not a game, it’s deadly serious 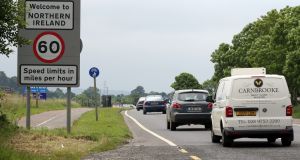 Sweet nothings are lovely while they’re being whispered in your ear. The problem is that a sweet nothing is still nothing. The British government’s long-awaited position paper on the Irish border after Brexit is really rather lovely. It tells Irish people of all political persuasions exactly what they want to hear: that there will be no physical border of any kind across the island and that free movement will go on as if nothing had happened. But behind all of these delightful reassurances, there is sweet FA.

The British government has a lot of seducing to do. By October, it has to have persuaded all the EU member states that “sufficient progress” has been made on the three big preliminary issues: the monetary divorce bill; the mutual rights of British citizens living in the EU and vice versa; and Ireland. To put this more bluntly, if the Irish government is not persuaded that Britain has a serious plan for the avoidance of a hard border on what will be its only land frontier with the European Union, the talks on a post-Brexit final status are going nowhere. This reality seems to have dawned at last – hence a position paper that could not be more emollient if it came dripping with honey.

But to understand how this seems to the Irish government and to most people on the island, imagine you are in a decent job. It is reasonably paid, apparently secure and the working environment is quite amicable. Your neighbour, who you like but do not quite trust (there’s a bit of history there) comes to you with a proposition. She’s establishing an extremely risky start-up venture with a high probability of catastrophic failure. Will you join her? Well, you ask, what are the possible rewards? Ah, she says, if – against the odds – everything goes splendidly, you’ll get the same pay and conditions you have now.

This is, in essence, what the British government is offering Ireland. If everything goes fantastically well, you’ll end up with, um, the status quo. Trade will “operate largely in the same way it does today”. The position paper is effectively a hymn to the way things are now. We don’t have a hard border, and we won’t after Brexit. We do have a common travel area that works remarkably well, and it will continue to go splendidly. The position paper takes existing realities and repositions them as a distant mirage, a fantastical possibility: less emerald isle, more Emerald City.

As with the whole Brexit project, the proposals for Ireland are credible only if you accept two mutually incompatible propositions: a) The UK is creating the biggest political and economic revolution since 1973; b) pretty much everything will stay the same. It fully concedes that the changes most of us fear from Brexit – the reimposition of a political and economic border and the reversal of so much of the progress made since the Good Friday agreement of 1998 – would be terrible. Indeed, it goes even further and characterises these changes as unacceptable. But it then goes on to suggest, in effect, that these utterly unacceptable things will not happen only if the EU gives the UK all the benefits of the customs union and the single market with none of the costs or restrictions.

The one really bold move in the paper is its rejection of the technological utopianism of the more enthusiastic Brexiteers, especially in the Democratic Unionist party. The commitment to “avoid any physical border infrastructure” means that there can be no CCTV cameras or registration-plate recognition systems. Magical machines are not going to take the place of human customs officers.

This is a welcome concession to reality, but it is predicated on an even bigger unreality: the assumption that the EU will agree to something quite extraordinary: that a 500km external EU border with more than 200 crossing points will be effectively unpoliced. People and goods will pass over it without let or hindrance. Smugglers, people traffickers and terrorists will go on their merry way unmolested. Small companies will not have to do customs checks at all; large ones will operate a charming honour system in which they retrospectively declare the goods they have moved and pay their duties.

The absurdity of the proposition becomes clear when we think about all the new trade deals that post-Brexit Britain is going to make. With no Irish border controls, US beef, Australian lamb, Chinese steel and Indian cars can be imported into Belfast, sent an hour down the road to Dundalk and exported tariff-free to France, Germany or any other EU country. The only way to stop this happening would be in effect to make Ireland itself a semi-detached member of the EU with all Irish exports subjected to customs controls at EU ports. And this is simply not going to happen – why on earth would any Irish government ever agree to it ?

This is why the position paper, for all its nice words, feels less like a serious attempt to find solutions and more like an early move in the blame game that will unfold when those solutions have not been found. It claims the moral high ground: Britain is utterly opposed to a hard border. Thus, when the EU responds by saying that a hard border follows inevitably from a decision to leave the customs union, it will be the EU’s fault. But this is not a blame game or any other kind of game. It is deadly serious. Britain has enormous political and moral responsibilities in Ireland. The position paper tells us what fulfilling those responsibilities would look like in practice – and it looks very like preserving the status quo. The minimum necessary for that to be a credible proposition would be for Britain to stay in the customs union. If it is not willing to do that, it cannot claim to be taking its responsibilities seriously.

1 Covid-19: Travel restrictions to stay and 'green list' put on hold amid fears of second wave
2 Ruth Negga: ‘People who say they don’t consider skin colour... are you f**king blind?’
3 If you are young and live outside Dublin you could be in trouble
4 If hairdressers ran our schools every child would be going back in September
5 Fintan O’Toole: On this Fourth of July, the American republic is in grave danger
Real news has value SUBSCRIBE