Fintan O’Toole: The crisis is over – so when does the cruelty stop? 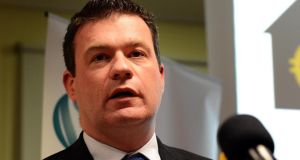 ‘Alan Kelly, to his credit, recognised that this was not exactly the best label to stick on his shiny new ministerial suit. He announced that the funding would be temporarily restored pending a review of the whole scheme.’ Photograph: Eric Luke / The Irish Times

So the crisis is over – now when does the cruelty stop? When does the petty, mean-spirited and nasty infliction of pain on people who already have it bucketfuls no longer enjoy the cover of “austerity”? When do “tough choices” mean picking on someone your own size rather than saying “tough shit” to people who have hard lives.

Last July, I wrote here about what were probably the most pointless, counterproductive and unconscionable cuts of all those made in the name of austerity. This was the sudden announcement to 23 organisations that provide support services for people with chronic disabilities that all of their core funding was being withdrawn immediately. We’re not talking about the mega-charities with inflated salaries but rather of the collective self-help groups that make life more bearable for people whose only fault is to have been dealt a bad hand by genetics, resulting in Alzheimer’s, multiple sclerosis and other degenerative conditions.

For the previous six years, these charities had received very modest but vital grants under what’s imaginatively called the Scheme to Support National Organisations (SSNO) which was established to provide core funding to “national organisations which provide coalface services to disadvantaged target groups”. It is a tiny programme: the average grant is €43,000.

The total at stake for the 12 neurological charities that were cut was €600,000, a pittance. But a pittance that matters enormously to all of these groups because it gives them money to employ a small staff. In some cases, we’re talking about one or two people, often part-timers paid €20,000 or €30,000 a year for work that turns out to be a lot more than part-time. They’re the people who organise the voluntary efforts, the fundraising and the advocacy that gives these vulnerable minorities some chance of having a voice in the public policies that affect them.

To take one example, the Huntington’s Disease Association supports people with an appalling genetic condition that produces terrible physical, cognitive and psychological symptoms. Their grant was €22,500 a year – that’s not a misprint and there is no missing zero. It’s shamefully small but it paid for a vital helpline and other supports. But it was money our republic apparently couldn’t afford.

It was probably lucky (if you can use this word at all in this context) that the outcry from these groups coincided with Joan Burton’s election as Labour leader and the consequent reshuffle in which Alan Kelly replaced Phil Hogan as Minister for the Environment. (SSNO comes under his department and is administered through the Pobal scheme for community groups.)

Kelly, to his credit, recognised that this was not exactly the best label to stick on his shiny new ministerial suit. He announced that the funding would be temporarily restored pending a review of the whole scheme.

It seemed obvious enough that this story was effectively over. Surely, anyone looking at this would conclude that the cuts were not just morally bad but fiscally mad, that the self-help these groups provide saves money by keeping people out of vastly more expensive hospital care.

But this is to reckon without the sheer bloody-mindedness of the austerity mentality and how deeply it has penetrated official thinking. The temporary bridging funds the groups were given in July run out in June. The groups were told in January they would be informed by the end of March of the review outcome.

It is now the end of March and no one has been told anything. More significantly, all the noises coming from officialdom have been to the effect that there was nothing wrong with the original decisions to cut all their core funding. In meetings with officials, 10 of the 23 groups have been told the people they represent are not “disadvantaged” – a sick joke on anyone who knows the intimate and insidious links between disability and poverty – seven that they should be funded by the Health Service Executive and six that both of these reasons for excluding them apply. In other words, the “review” is turning out to be an exercise in justifying the cuts – and preparing the ground for them to be reimposed in June.

Meanwhile, groups that got no funding (the Coeliac Society, for example) were told they could appeal. Last July, when Micheál Martin raised the issue in the Dáil, Enda Kenny said: “A formal independent appeals process is open to any organisation that has seen a reduction in funding and I suggest this is the route to follow.” They did so – the last they heard was in October when they got an email: “As soon as the department has concluded its deliberations Pobal will communicate the final outcome to you without delay.”

This is one of the results of the rhetoric of the last seven years. Messing vulnerable people around used to make you a creep. Now it makes you tough. You can look those pitiful people coldly in the eye and not flinch. You can face down the most vulnerable citizens and still feel righteous.