Fintan O'Toole: The big hold up for rural broadband is ideology 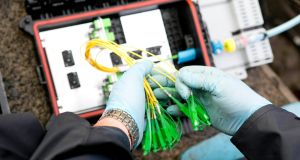 What we’ve ended up with after 16 years is a tendering process in which there is just a single bidder which has no experience at all of building this kind of infrastructure. Photograph: Karl Hussey/Fennell Photography

Fans of the Game of Thrones novels will understand my plight. They have been waiting year after year since 2011 for George RR Martin to publish the next volume of the saga, which is apparently to be called The Winds of Winter. But their frustration is as nothing compared to mine. I’ve been waiting since 1999 for the former Fianna Fáil minister Mary O’Rourke to publish her book on the privatisation of the State’s telecommunications company, Telecom Éireann. It would be all the more fascinating to read it right now as the debacle of the National Broadband Plan continues to unfold. The infrastructure company SSE, a crucial part of the only consortium still in the competition to bring broadband to 542,000 homes and businesses in rural Ireland, has pulled out of the process.

It was in April 1999 that Mary O’Rourke, then minister for public enterprise, told the Seanad: “Despite the fact that the taoiseach said we must not write books about our time in government, I intend to write a book about Telecom. I am writing about Telecom at the moment while the subject is fresh in my mind. In order for my job to be successful, it would not be wise for me to speak on certain matters.” The hint was that her book would eventually reveal all the dramatic secrets behind one of the greatest triumphs of Irish history, the flogging off of the public utility that could have actually implemented a national broadband plan.

1 Swedish expert backtracks on herd immunity for Ireland
2 Nursing home ordered to pay €150,000 to care workers sexually harassed by 93 year old
3 Miriam Lord: Micheál has Mary Lou pegged as a street angel and House devil
4 Rising Covid-19 infections among older people ‘a grave concern’, NPHET warns
5 Millennial burnout: ‘The first generation predicted to go backwards in terms of life expectancy’
6 Dr Martin Feeley: Young and healthy majority need to be allowed to live
7 Air travel never going ‘back to way it was’
8 Katherine Ryan: ‘I definitely felt shame as a single mother, the way people word things’
9 Germany’s ‘Uncle Brexit’ can’t explain Westminster anymore
10 Sweden and coronavirus: how has the outlier of Europe fared?
11 Volvo’s XC40 plug-in hybrid beats the BMW X1 – how did that happen?
12 Brexit: British law-breaking plan shocking but not unexpected
13 Irish company to test vaccines on volunteers deliberately infected with Covid-19
14 Let coronavirus spread through under-60 population, Dáil committee told
15 Gordon D’Arcy: Losing such a big game shines a very harsh light on certain players
16 Sitka spruce plantations ‘affect your mental health’ – Leitrim farmer
17 Micheál Martin right on using teen influencers to highlight Covid responsibilities
18 How can I tell my husband it is over and I want a divorce?
19 Germany declares Dublin a Covid-19 risk area because of high number of cases
20 Cult leader who claims to be reincarnation of Jesus is arrested in Russia
21 Dr Ronan Glynn: Struggling hospitality sector will not influence public health decisions
22 The Music Quiz: What song did the BBC say was 'too depressing' to play?
23 Coronavirus vaccine: 15 billion doses needed to inoculate the planet
24 HSE to provide extra 1,500 hospital beds as part of €600m winter plan
25 Dunnes Stores set to enter grocery delivery market
26 Should I switch bank now with Ulster Bank at risk of closing?
27 BoI redundancies, ‘tax war’ warning for Ireland, and retailers in rent arrears
28 Brian Boyd: Rave on, Van Morrison, rave on thy holy fool
29 IRA chief of staff tipped off gardaí about Arms Trial guns, says Seán Haughey
30 Irish hauliers say they will be ‘between a rock and a hard place’ post-Brexit
31 Minister loses important Supreme Court appeals over approach to deportation cases
32 Life in Level 3: What is happening under the new restrictions in Dublin?
33 Why are men still explaining things to women?
34 Eir takes on extra staff as ComReg chases it on complaints
35 No-deal Brexit’s economic cost for UK ‘could be three times worse than that of Covid’
36 The far right rises: Its growth as a political force in Ireland
37 The pick of the Dublin restaurant meals to go
38 Our neighbour says he has permission to build on our boundary wall. Can he?
39 Don’t dip your pen in someone else’s blood: writers and ‘the other’
40 Newton Emerson: Coronavirus has been good for Northern politics
Real news has value SUBSCRIBE