Fintan O’Toole: Stability can only come from radical change

For how many of its 93 years of existence has the State been economically successful? 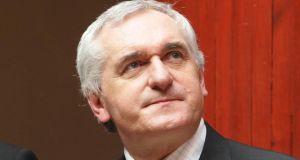 ‘The Bertieist system was highly sophisticated: it created ever-shifting coalitions of interest based not on any long-term coherence but on brilliantly improvised management and huge wads of cash. It was an essentially tribal system, in which the big chief kept control over the little chiefs by distributing or withholding largesse.’ Photograph: Alan Betson

Here’s a question with two radically different answers: did this State ever work? One answer would be resoundingly positive: the State did a remarkably good job of establishing itself after a civil war, of absorbing its main opponents peacefully and democratically, of avoiding fascism in the 1930s, of steering itself into the European mainstream and of seeing off the possibility of another civil war in the early 1970s. Looked at purely as a set of governing institutions and political cultures, the State has been a remarkable success. It has shown itself to be resilient, stable and able to manage the adaptations necessary for survival. And it has just come through another existential challenge – the loss of its own sovereignty in the banking crisis. From inside the deep State (the permanent government and the political machine that gives it legitimacy) the perspective must be one of quiet confidence. The State can look ahead to 2022, the centenary of its foundation, with a serene certainty that it can go on indefinitely, pretty much as it is.

That the population continued to decline, without a war, for the first 40 years of the State’s existence tells its own story. Since then, we’ve had (very broadly) success in the 1960s and early 1970s, deep crisis in the 1980s, success from early 1990s to 2002, a disastrous hypersuccess for five years and a shattering crash. Crudely, the State has worked in this sense for about a quarter of its existence.

From the first perspective outlined above, the current crisis actually vindicates a smug conservatism: if the State can survive even the loss of its own sovereignty it can surely survive anything.

But smugness is misplaced. The State’s great strength was built on sands that have now shifted. Three very big things have gone or are slipping away. The first was a deep social and cultural consensus. The very particular fusion of authoritarian Catholicism and nationalist democracy that dominated the State created what Tom Inglis has called a “moral monopoly”. It was a box outside of which almost no one could think. There was an intellectual, one might even say a spiritual, stability that defied all the more practical failures. And that’s gone.

The second thing that’s more or less gone is Fianna Fáil. We’re all so aware of the party’s appalling failures that we forget that it was, in effect, the State. It gave the State legitimacy in 1932 by taking it over. And thereafter it dominated every aspect of the way the State functioned, from the daily patronage of county council jobs to international relations. Everyone, from the sick old woman hoping for a hospital bed to the rich barrister hoping to make it to the Supreme Court, knew that this was how Ireland worked. There might be “temporary little arrangements” from time to time but the deep system was Fianna Fáil. This was, of course corrupt and abusive but, in its own terms, it worked superbly. And this isn’t coming back either, much as Fine Gael would love to inherit the role.

Thirdly, there’s money. The crisis in these first two aspects of the State’s strengths has been going on for decades. But it was held at bay between the mid- 1990s and 2008 by the ability of governments to buy off social and political tensions, what we might call Bertieism.

So we have a State stripped of social and moral consensus, without its great machine of long-term patronage and control and without the money to reward its supporters and suck in its critics. Even if we leave aside all the huge challenges it faces (debt, demographics, the erosion of public services), that’s a State that has lost its stabilisers and is sure to wobble. Hence the paradox of our current situation: stability can come only from radical change. If it does not remake itself the State is a centre that cannot hold.

1 US passengers fly into Dublin: ‘I’m here for six days. I guess I’ll have to stay inside’
2 Quarantine process to be tightened as health officials grow nervous
3 Maureen Dowd: Biden has his limitations but he’s no Trump
4 Keith Duggan: Bubba Wallace tweet shows just how troubled Donald Trump’s mind is
5 Forget bulging muscles; strength is all about nerves
Real news has value SUBSCRIBE