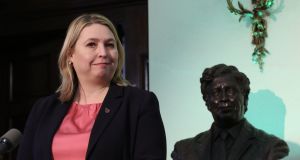 Secretary of state for Northern Ireland Karen Bradley: When she volunteered that she took the job not knowing nationalists did not vote for unionists, she was revealing an ignorance that is not, alas, outstanding. Photograph: Nick Bradshaw

The book is very good so I will spare the author’s blushes and not name her. It’s a study of British culture in the 18th century and it has just recently appeared from one of the most prestigious academic publishers in the English-speaking world. The writer is a senior lecturer in 18th-century cultural history at one of England’s best universities.

The book itself is dazzlingly erudite, the work of a top-of-the-range scholar. And here is the sentence that made me dizzy: “The Act of Union in 1707 united Scotland with England, which by that time also included Wales and parts of Ireland.”

This is not just one historian. A prestigious scholarly book like this is read by many experts before it is published

In 1707, the Kingdom of Ireland was one of three distinct kingdoms under the “personal union” of crowns held by the British monarchy, the other two being England and Scotland. It had its own parliament, albeit one that excluded Catholics. It remained a separate political entity until 1801 when the Act of Union came into force.

One can just about understand that a historian, trying to summarise the history of the union in a sentence, might garble the chronology and lose all the nuances. At the very outmost reaches of generosity, one might even understand the error of saying that Ireland as a whole was included in England – it was after all effectively ruled from London. But this is much weirder than that.

The idea of “parts of Ireland” being in England and other parts not is just baffling – unless we make one assumption. For surely what is happening here is that our historian is dragging up from the depths of her consciousness some vague notion that there is this place called Northern Ireland and it is still “included” in England, so it must have been so in 1707.

And this is not just one historian. A prestigious scholarly book like this is read by many experts before it is published. The publisher would, at a minimum, get two independent experts in the field to read the manuscript as part of the peer review process, plus the overall editor and the copy editor – so that’s at least four very smart people. But even before that, academics will ask colleagues to read the manuscript. In this case, the author acknowledges by name those who read it and “offered generous and insightful advice” and those who also “offered commentary, suggestions or guidance”.

I counted 20 people in these two categories. They are big figures in academic life in England, Scotland and the United States – including some of the most distinguished historians of British politics, art, literature and science.

So with the author, the editors and the peer reviewers, there are at least 25 super-educated people, most of them professional historians, who read that in 1707 “England . .. also included Wales and parts of Ireland” and did not cry out in amazement. This egregious piece of nonsense got through the intellectual equivalent of high-level airport security screening and set off no alarms.

Now, okay, this is one half-sentence in one book. Five years ago, it would barely have seemed worthy of complaint. But in the great upheaval of British politics since 2016, we’ve all had a crash course in ignorance. It has become increasingly clear that the nature of what Theresa May calls the “precious, precious union” is in fact increasingly unclear to much of the political and intellectual nexus in Britain.

When the actual secretary of state for Northern Ireland, Karen Bradley, happily volunteered the information that she took the job not knowing that nationalists did not vote for unionists and vice versa, she was revealing an ignorance that is not, alas, outstanding. If not knowing the most basic stuff about the contemporary politics of the place you are in charge of is okay, why should anyone, even professional historians, know about 1707 and 1801 and 1920?

If not knowing the most basic stuff about the place you are in charge of is okay, why should anyone, even professional historians, know about 1707 and 1801 and 1920?

I don’t think this is true in Ireland. I don’t think a claim that, say, in 1707 some parts of Scotland were already in England, would go unchallenged in Irish public discourse, let alone among professional historians. But this doesn’t save us from the consequences of ignorance.

The political tectonic plates of these islands are shifting and we cannot insulate ourselves from the shocks. The union may be coming towards its end and all of Ireland, not just “parts”, will be “included” in its death throes, whether we like it or not. The least we might ask is that, if our histories are again to be bound together, there is a minimal understanding of what those histories are.

1 Mary Lou has to call for the smelling salts as SF councillor deals a knock-out blow
2 Dublin gangland figures involved in Drogheda feud that killed 17-year-old
3 Who was murdered teenager Keane Mulready-Woods?
4 Murdered and mutilated: Keane Mulready-Woods and the teenagers of gangland
5 Welcome to Iten in Kenya – home of champions and cheats
Real news has value SUBSCRIBE