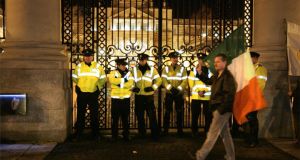 A protester holds a Tricolour aloft outside Government Buildings as the Cabinet discussed a financial bailout from the International Monetary Fund and the European Union. Photograph: Dara MacDónaill/The Irish Times

How do you bury bad news? Get it out in the dark, slumped-down days between Christmas and New Year when nobody is paying attention. Who noticed that, somewhere between the turkey and the pudding, we were slipped the biggest U-turn in the Government’s sorry history of retreats?

Remember the seismic shift and the special case? At the end of June 2012, Michael Noonan hailed an agreement reached by EU leaders on banking debt as a “seismic shift” for Ireland. Our gallant allies in Europe had agreed, against all the predictions of the naysayers, to break the link between banking debt and sovereign debt. There was now the prospect of the €64 billion the Irish taxpayers had put into the banks being managed at a European level, taking it out of the national debt.

It was now possible, Noonan told us, to “negotiate a scheme where we can effectively transfer from the sovereign debt the recapitalisations already done so that our position is more sustainable and we get back into the markets”.

What was happening, he said, was a reward for Ireland’s compliance with the troika’s austerity programme: “So effectively what they are saying is that if you deliver on your programme and accept all the conditions, Europe will give you additional help.”

He claimed to have spoken to every one of the other 26 EU leaders and presented the deal as the restoration of national pride: “As this process rolls out, people will understand that Ireland is a serious country”.

The seismic shift was followed soon afterwards by the special case. In October 2012 we were told of a “hugely significant” phone call between the Taoiseach and German chancellor Angela Merkel. The call was a triumph for Enda Kenny. In a joint statement he and Merkel said they had “discussed the unique circumstances behind Ireland’s banking and sovereign debt crisis, and Ireland’s plans for a full return to the markets.

“In this regard they reaffirmed the commitment from June 29th to task the euro group to examine the situation of the Irish financial sector with a view to further improving the sustainability of the well-performing adjustment programme. They recognise in this context that Ireland is a special case and that the euro group will take that into account.”

The day after this discussion with Merkel, the Taoiseach called on French president François Hollande. Speaking to reporters afterwards, Hollande echoed Merkel’s comments and said Ireland was “a special case and should be treated as such”.

A 2012 International Monetary Fund study of 147 banking crises found Ireland is indeed a special case. There is nothing, anywhere in the developed world, anything like what was done to the Irish people. The IMF measured the pain for citizens on three criteria: loss of economic output, fiscal costs and the increase in public debt. “Ireland,” it concluded, “holds the undesirable position of being the only country currently undergoing a banking crisis that features among the top 10 of costliest banking crises along all three dimensions, making it the costliest banking crisis in advanced economies since at least the Great Depression.”

Getting some recognition of the grotesque and unprecedented nature of the Irish bank bailout was the Government’s greatest diplomatic triumph. Its softly-softly approach to the bank debt had paid off – the EU had finally accepted that poor little Ireland had sacrificed itself to save the European banking system and deserved tangible help.

We had been good and now we were about to get our reward. Except nothing happened.

The seismic shift measured zero on the Richter scale. The special case was just a little pat on the head for Enda’s success in getting the referendum on the European Fiscal Treaty passed and imposing austerity as instructed. The Government blew its triumph by putting on the rich mouth.

In its eagerness to create a “success story”, it changed the message. We were not the worst victims of a euro-zone policy of rescuing all banks, however abysmal they might be. We were grand. It’s all good here – the only way in which Ireland is special is in its spectacular success.

And so the news petered out in the last few days from “briefings” – we are no longer looking for a European deal to get the bank debt off our national debt. The “hugely significant” policy has been quietly dropped.

This was sold as good news: we’ll flog off the banks and get €17 billion of the €64 billion back. Hurrah! Isn’t it marvellous? And so the “seismic shift” story has turned out to be like Miss Prism’s novel of “more than usually revolting sentimentality” in Oscar Wilde’s The Importance of Being Earnest: “The good ended happily, and the bad unhappily. That is what Fiction means.”