‘A part of this delusion is a simplistic and ageist assumption that nursing home care is almost some form of lifestyle choice, with low levels of care required’ 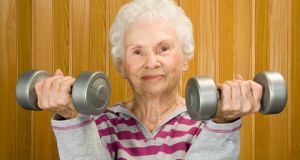 ‘Priorities should turn to engagement with users of the services (the proposed Working Group makes no mention of them) . . .’ Photograph: Getty Images

One of the great advances of the last century is that nearly all of us will live longer and with less disability than recent generations. A part of the trade-off is susceptibility to age-related diseases, of which cancer is a prime example, and one where costs are likely to increase significantly due to technological advances.

Imagine, then, the scenario if we portray cancer care of older people as an unsustainable present and future burden. In response we set up a scheme for cancer care for older people which has a set budget, let the public hospital cancer services deteriorate so as to divert cancer care to private hospitals, fudge eligibility to therapist services and equipment, exchange entitlement to care for payment of significant sums of money for their treatment (including up to a fifth of the value of their house) and divert Health Service Executive staff to assess and collect this money.

Imagine also that we then set up an anonymous review group eight years later to review the scheme which did not involve patient representatives (as the current national cancer strategy review does) and the focus of which is on cost rather than quality?

Now just change the illness from cancer to other age-related illnesses such as dementia, stroke or Parkinson’s disease, the main reasons to require nursing home care, and you will have a pretty clear picture of not only the parameters of the Nursing Homes Support Scheme (previously the Nursing Home Subvention Scheme), otherwise known as Fair Deal, but also of the review of the scheme released this week.

A part of this delusion is a simplistic and ageist assumption that nursing-home care is almost some form of lifestyle choice, with low levels of care required. In fact, it is a wrenching choice precipitated by severe age-related disease and disability, and the care needs of the older people are complex and require a significant upping of our game, as we learned from the Leas Cross scandal.

Up to 2009, for the minority of those who need nursing home care, eligibility was free, apart from 80 per cent of the State pension. Sadly, the ageist climate of the time was such that this eligibility was widely concealed, as we learned from the major scandal of illegal nursing home charges which broke under Micheál Martin’s tenure as minister for health in 2005.

The Fair Deal scheme exchanged this eligibility for much more significant charges, now more than 20 per cent of the value of the house, 80 per cent of income and 7.5 per cent a year of assets, a situation that would be unthinkable for care for other illnesses.

In fact, by the calculations of the Joseph Rowntree Foundation, we should be seriously concerned at the National Treatment Purchase Fund funding of private nursing homes, especially if they are providing the needed equipment, nursing supplies and therapies. In addition, the lesser pay and poorer conditions in the sector have had a predictable effect on recruitment and retention of high quality staff.

The recent review further accentuates the perception of older people who require nursing home care as a burden, with “cost” mentioned 152 times, and “quality” (other than in the Health Information and Quality Authority’s title) a mere six times.

The emphasis on cost and the apocalyptic predictions avoid reflection on the wider international context. As long ago as 1999, Prof Bob Stout of Queen’s University chaired a UK royal commission which calculated that long-term care funding was manageable from the general exchequer within virtually all possible projections of economic growth, a position adopted by Scotland with nursing home care free at the point of entry.

In the UK, despite a huge increase in the number of older people, the number of nursing home beds has remained steady or even declined.

It is time that we accepted that Fair Deal arose at a time when ageist and simplistic notions of nursing home care were widespread, and that we should radically rethink our approach to this healthcare need, putting it on the same basis as other healthcare. Equally, this jaded model should not be seen as a Trojan horse for charging for community services.

Priorities should then turn to engagement with users of the services (the proposed working group makes no mention of them), reversing the neglect of public and voluntary nursing homes, focusing on geographical areas of underprovision (particularly large urban areas), displacing sterile private-public debate with a clear articulation of needs and how to meet them, and above all, reminding ourselves that we are all potential users of nursing home care.

1 We are ‘sale agreed’, but can we go back with a lower offer?
2 Minister resigns over Dominic Cummings’ Covid-19 lockdown trip
3 Working from home: New costs, new stresses and little relief
4 Coronavirus: What will reopen in Ireland’s phases to ease restrictions?
5 Fintan O'Toole: Last week's hysteria shows politicians and judges need to get a grip
Real news has value SUBSCRIBE