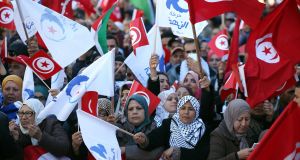 For those of us who were there – apart, presumably, from the family, friends and entourage of Zine al-Abidine Ben Ali, the dictator who had just been run out of the country – the intoxicating, seductive energy of Tunis in the revolutionary days of January 2011 left a deep impression.

I had first visited Tunisia about eight months before the revolt. It was a beguiling place but, for a journalist, an endlessly frustrating assignment. My meetings with senior officials were granted and then abruptly cancelled.

Hotel staff warned me that my phone calls were being listened to and my emails monitored. I was followed everywhere I went. Engaging people in conversation about current affairs, not to mention Ben Ali and his family, was difficult

Hotel staff warned me that my phone calls were being listened to and my emails monitored. I was followed everywhere I went. Engaging people in conversation about current affairs, not to mention Ben Ali and his family, was difficult.

Mouchards, or eavesdroppers, were everywhere, I was told. What candid discussions I did have invariably had to take place outdoors.

When I returned to cover the uprising, the public space was transforming. Ben Ali succumbed to the power of the street and fled to Saudi Arabia, and it was as if a switch had been flicked and the fear had vanished.

Suddenly, people were free to talk, to gripe, to organise, to argue. Human rights activists marvelled at being able to visit one another’s homes without a tail. People gathered in groups on Avenue Bourguiba, listening to strangers make their political pitch. Bookshops stocked up on long-banned titles. Spontaneous marches broke out all across the city, full of idealistic young people singing verses from the national anthem, proudly appropriating it for the cause:

When the people wish to live,

Oppression shall then vanish.

Fetters are certain to break.

In my memory, those stirring bars were the soundtrack to the revolution.

The sense of optimism that enveloped Tunisia in those heady days only grew over the following weeks and months, as popular protests spread to Egypt, Libya, Yemen, Syria and Bahrain.

Even when some of those revolts crumpled under the bullets and batons of the brutal regimes they sought to overthrow, Tunisia, progenitor of the regional upheaval, remained a beacon of hope. Ten months after Ben Ali was deposed, Tunisians went to the polls in democratic elections contested by 120 parties, ranging from communists and secular liberals to Islamists and remnants of the old ruling party. The constituent assembly those elections produced then wrote a progressive new constitution that enshrined Tunisia’s mosque-state separation and the rule of law.

Seven years after the revolution, with its young democracy having held, Tunisia is widely lauded as a shining example to the rest of the world. It has high levels of education, a vibrant civil society, no deep ethnic divisions and no oil wealth that attracts meddling foreigners. The accomplishments of Tunisia’s fledging democracy are inarguable, but it’s also more fragile than many assume and the complacent tone of much of the western commentary risks obscuring the real threats it faces.

The first of these is a security problem. The tourism industry has yet to recover from the devastating effects of attacks on the Bardo museum in Tunis and the resort of Sousse in 2015. Spillover from the Libyan conflict and the prospect of thousands of battle-hardened jihadis returning from Syria and Iraq – Tunisia had the largest single contingent of foreign fighters in those conflicts – poses an ongoing threat to the country’s stability.

But the bigger threat, the one that strikes to the heart of the new order’s legitimacy, is the dire state of the economy. Among the young and in the neglected interior in particular, the events of 2011 produced expectations that the post-revolutionary period has failed to fulfil.

Economic growth is stagnant, inflation is soaring and the informal economy is thriving. This month, on the anniversary of the revolution, Tunisians took to the streets not in celebration but in protest at painful tax and price increases imposed by the government on January 1st to mollify its international donors and reduce the budget deficit.

Some even express nostalgia for the Ben Ali era. “Bread, freedom, dignity,” the crowds chanted in 2011. But what good are the latter two if the first is absent, many are concluding.

Last month, the International Crisis Group warned that Tunisia was drifting back towards its old authoritarian reflexes, partly due to the failure of the nationalist and Islamist partners in the coalition government to implement the 2014 constitution and create the institutions it envisaged.

Tunisian leaders have a responsibility to put that right. But the rest of the world has a vital role to play. Instead of cutting the aid budget for Tunisia by two thirds, as Donald Trump is proposing to do, or keeping its market closed to so many Tunisian goods, as the European Union does, the West should be doing everything it can to support Tunisians in seeing through their revolution.