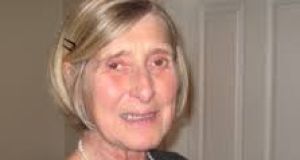 Elizabeth Meehan specialised in the analysis of public policy, especially in the EU context, and in the British-Irish relationship

Elizabeth Meehan, who died suddenly at the age of 70, was a distinguished academic who was the first female professor of politics on the island of Ireland, breaking that particular glass ceiling for women in the profession.

Meehan specialised in the analysis of public policy, especially in the EU context, and in the British-Irish relationship. Born in Edinburgh, she spent most of her early life in Scotland. It took her some time to find her way to academia.

Meehan was the eldest of four children of David Meehan, proprietor of an upholstery business, and his wife Marian, nee Mackenzie. She was educated in West Linton primary school, 16 miles from Edinburgh, and in Peebles High School. She stood out as an exceptional pupil at both schools and enjoyed what she described as a very happy and carefree childhood.

She began her third-level education with a spell in the Edinburgh College of Art, but quickly decided that this was not the life for her. Meehan then entered the civil service and spent eight years in the British Foreign Office before returning to university. She graduated with a first in politics from Sussex University in 1976, and was awarded a D Phil from Oxford in 1982 for a thesis on an aspect of public policy that was to remain an abiding interest: equality of employment opportunities for women in the United Kingdom and the United States.

In 1991 Meehan accepted the post of professor of politics at Queen’s University Belfast after period at Bath University and Manchester University. She became a Jean Monnet professor of European studies in 1992.

Many positions of importance

Meehan went on to hold many positions of importance in Queen’s – including dean of the faculty of economics and social sciences in 1995. When her term as dean came to an end, she was afforded a year’s sabbatical, which she spent in the Policy Institute at Trinity College Dublin.

In 2001, shortly after her return to Queen’s, she became the founding director of the interdisciplinary Institute of Governance, Public Policy and Social Research. In this role, Meehan brought people together from the academic, policy and third sectors, and invested much time and energy in fostering interdisciplinary and inter-sectoral work. It was always Meehan’s view that carrying out excellent research was necessary, but not sufficient. It also had to be useful knowledge, empowering as well as enlightening, with an application to the policy puzzles and societal problems of the day.

After her retirement from Queen’s in 2005, Meehan continued her active academic life. She held an emeritus professorship in the school of law in Queen’s, and also became an adjunct professor in the school of politics and international relations, University College Dublin, where she contributed substantially to the Institute for British-Irish Studies. She also held an honorary position in the school of social and political science at Edinburgh University. In all of these roles, she gave her time and talents in a typically full and generous manner.

Meehan saw it as her duty to give back to the wider community, and this she did in full measure. In 1991 she became trustee of the Scarman Trust, a charity devoted to raising public awareness of political and constitutional matters. In 1994 she became a commissioner of the Fair Employment Commission of Northern Ireland. In 2007, she was appointed to the board of the National Social and Economic Council as one of the taoiseach’s five nominees.

Other bodies with which she was deeply involved will give an idea of the breadth of her commitment: the charity Bryson House, of which she was chair (1998-2001), and of whose role in changing and transforming the lives of those on the social and economic margins of society she was very proud; the Northern Ireland Women’s Coalition, many of whose meetings in the late 1990s she hosted in her home; and the Home Office Advisory Board on Naturalisation and Integration, which advised on the most effective means of encouraging the integration of applicants for citizenship into UK society.

Meehan was the quintessential scholar, with a deep and abiding interest in citizenship, the European Union, equal opportunities and gender equality. In a contribution to the book Citizenship, Democracy and Justice in the New Europe, she argued persuasively for a new conception of citizenship flowing from EU membership. She saw this new citizenship being tied to a shared moral order and not to the traditional nation state. She argued for a cosmopolitan form of citizenship long before that strand in intellectual thinking became fashionable. That piece is as relevant today as it was when published in 1997.

She is survived by her sisters Mary and Margaret, her brother David, and her extended family.