Sides agree on fisheries, level-playing-field guarantees and fulfilment of obligations 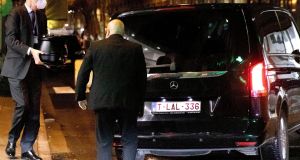 A member of the British delegation loads a soup cauldron into a van outside the UK mission to the EU in Brussels on Wednesday. Photograph: Virginia Mayo/AP Photo

After gloomy briefings from both sides on Tuesday about the prospects of a post-Brexit deal by Christmas, Wednesday morning saw a dramatic upswing in the mood as British and European Union sources agreed that the prize was within reach. By mid-afternoon, preparations had begun for televised statements by Ursula von der Leyen in Brussels and Boris Johnson in London as word reached European capitals that the deal was done.

As afternoon gave way to evening, it emerged that the negotiators were still talking, reportedly making a final check of the text of the agreement. As the hours dragged by and news deadlines fell away, it was unclear if an announcement would come on Wednesday night or on Christmas Eve.

But there was little doubt that the deal was done, with the two sides finding agreement on the most contentious issues of fisheries, level-playing-field guarantees of fair competition and how to ensure that both sides fulfilled their agreed obligations.

If EU ambassadors sign off on the deal on Thursday, the European Council can agree to apply the agreement provisionally from January 1st pending approval from the European Parliament later next month.

MPs will return to Westminster on December 30th to consider all stages of any necessary implementation legislation in a single day, with the House of Lords expected to put it to a vote the same day.

The European Research Group (ERG) of Eurosceptic Conservative backbenchers said on Wednesday night that they would examine the details and legal text of any deal “as expeditiously as possible”. They will reconvene a “star chamber” of lawyers led by veteran MP Bill Cash, which gave its verdict on Theresa May’s withdrawal agreement in 2019.

“Given that the new agreement is also highly complex, the star chamber will scrutinise it in detail, to ensure that its provisions genuinely protect the sovereignty of the United Kingdom, after we exit the transition period at the end of this year. The star chamber, which will include some new members to replace those now in government, will undertake its examination as expeditiously as possible, before providing its conclusions on the merits of the deal – which we will aim to make public before parliament reconvenes,” chairman and deputy chairman Mark Francois and David Jones said in a statement.

Keir Starmer has signalled that Labour will support the deal so it is all but certain to be approved but Johnson will wish to pass it with Conservative votes and to limit any backbench rebellion to a handful of the most diehard Brexiteers.