Enda Kenny: We must act now on climate change or it will be too late 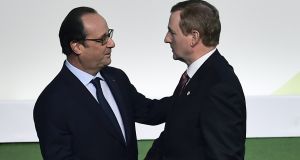 Taoiseach Enda Kenny shakes hands with French president Francois Hollande upon his arrival for the opening of the UN conference on climate change, on November 30th, 2015 at Le Bourget, on the outskirts of the French capital Paris. Photograph: Loic Venance/AFP/Getty Images

On Monday I will join more than 120 other world leaders and the representatives of some 190 countries in Paris to support and mark the opening of the 21st Conference of the Parties to the UN Framework Convention on Climate Change, known as COP21.

As we come to the end of what may be the hottest year on record, the stakes could not be higher. Either we act now or it will be too late to curb rising temperatures and limit the damage to our planet.

Our goal in Paris is to agree a legally binding treaty that will ensure that all parties act to limit the average global temperature increase to less than 2°C above pre-industrial levels.

Failure to curb temperature increases will impact all countries, Ireland included, but with the most immediate and drastic effects being felt, in many instances, by the most vulnerable countries and communities.

The scale of the transformation needed will not come easily and will require real global effort. I am proud that Ireland is playing its part to drive an ambitious and comprehensive agreement at COP21.

With our European Union partners, we have committed to a collective target of reducing greenhouse gas emissions by at least 40 per cent by 2030.

Next year, individual targets for EU member states will be agreed and we are pursuing a fair and achievable target for Ireland.

The union and its member states have supported France’s presidency of the conference, and I wish to salute the French commitment and resolve, especially in the context of the recent attacks on Paris, to reaching an agreement.

While these figures give some confidence, we cannot be complacent, and further efforts will be needed. Added to that, considerable long-term commitment and investment will be required by all if we are to secure a lasting agreement.

Crucial to reaching an agreement will be the question of support for those countries that will need assistance in making the transition to a low-carbon, climate-resilient future, and help for those communities living with the daily consequences of climate change.

Developed countries have committed to mobilising $100 billion per year by 2020 from a wide variety of sources, including public and private funds.

In 2014, Ireland provided €34 million to build resilience to climate extremes and integrate climate-smart agricultural solutions into the economic planning of some of the world’s least developed countries.

Next year, Ireland will commence contributions to the United Nations’ Green Climate Fund. We will also continue to support former president, Mary Robinson, in her role as UN special envoy for climate change and the Mary Robinson Foundation in its work on Climate Justice.

In recognition of the importance in the negotiations of vulnerable, developing countries and our own strong links with them over many years, Ireland has also provided support to the Least Developed Countries Fund and will continue to do so.

By far the greatest contribution Ireland can make is to lead by example, by actively pursuing its own transition to a sustainable, low-carbon economy.

Accepting this challenge is not only in Ireland’s interest - it also presents considerable opportunities for sustainable growth and innovation.

The wide-reaching nature of the challenge demands a whole-of-government approach.

Legislation currently in the final stages of the Oireachtas sets out our intention to make substantial cuts to CO2 emissions in the electricity, transport and built environment sectors by 2050, while developing an approach towards carbon neutrality in the land sector that does not compromise our capacity for food production.

It includes five-year national mitigation plans to develop the policies necessary for a low-carbon economy. Work on these plans is already under way across government, and is benefitting greatly from the input provided by the newly established Climate Change Advisory Council, chaired by Prof John FitzGerald.

As an integral part of our national response to mitigation and specifically in striving to reduce emissions in the energy sector, we must ensure a reliable and affordable electricity market for citizens and business.

Work is also under way in developing a new National Framework for Adaptation to make sure Ireland is prepared for the unavoidable impacts of climate change.

Government will shortly agree a Sectoral Adaptation Plan for flood risk management. By 2021, spending in this area will reach €100 million per annum.

One significant area for Ireland is our valuable and already efficient agriculture sector.

Through a series of innovative programmes, like carbon footprinting our farms, we are driving economic and environmental efficiency in agriculture and achieving results that we believe are transferable and scalable.

Irish research will contribute to global progress and have the potential to help all countries realise the potential of their land sectors in addressing climate change - this means reducing emissions, adapting to impacts and enhancing and improving carbon sinks.

We will also work in pursuit of maximum recognition of these factors within the EU and wider international frameworks.

Already this year, through the Sustainable Development Goals, we have seen the world come together to ensure our collective future. It is now essential that we in Paris seek an ambitious agreement on how, collectively, we will fight climate change.

I was struck by the understated but effective title of Pope Francis’s recent encyclical, Care for Our Common Home. Our home is indeed at stake.

The negotiations and what comes afterwards will not be easy, but they are essential and offer real opportunities to both protect and enhance the quality of life of our people and the long-term prosperity of our countries.