The Irish Times view on US hacking claims: a shadow campaign

Technology firms have a responsibility to detect and obstruct the election-meddling campaign, and to co-operate better among themselves 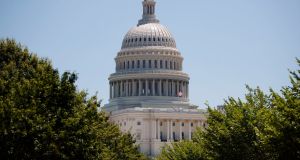 Microsoft announced on Tuesday that hackers linked to the Russian state tried to target the websites of two conservative think-tanks. Photograph: Carolyn Kaster/AP

The United States government has long believed that the Russian state mounted a concerted digital campaign of interference in the 2016 presidential election. That campaign is ongoing and persistent, if the claims of US intelligence and technology firms are accurate. Last month, FBI director Christopher Wray said his agency was seeing information operations “aimed at sowing discord and divisiveness in the country.” Just days later, Facebook announced it had discovered a similar operation designed to fuel divisions among Americans by targeting progressive groups. The firm did not explicitly name Russia as the culprit, but it pointed to similarities between the effort and previous work by the Russian state-linked Internet Research Agency.

November’s midterm elections are expected to be targeted; already senator Claire McCaskill, a Missouri Democrat who is running for re-election, has said Russian hackers tried to infiltrate her senate computer network. But the latest report – this time from Microsoft – suggests a much broader, and increasingly sophisticated, hacking effort is underway. On Tuesday, the software giant said hackers linked to the Russian state tried to target the websites of two conservative think-tanks. One, the International Republican Institute, includes among its board members the noted Russia critics John McCain and Mitt Romney. Another, the Hudson Institute, has worked on cybersecurity and the rise of kleptocracy in Russia and elsewhere.

Russia has denied any involvement. Unfortunately, as we know from experience in Ukraine and Syria, Russian denials don’t count for much these days. Moscow’s patterns of behaviour suggest it is increasingly emboldened and aggressive.

Technology firms have a responsibility to detect and obstruct the election-meddling campaign, and to cooperate better among themselves. And the world has a responsiblity to punish Russia for its actions. For a start, that will require much stronger, targeted and coordinated economic sanctions.