The Irish Times view on the presidential election: blurred lines at the Áras 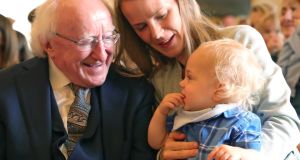 To many observers, the lines between Candidate Higgins and President Higgins appear a little blurred. Photograph: Colin Keegan/ Collins Dublin.

At Áras an Uachtaráin on Monday, Michael D Higgins and his wife Sabina hosted a “Latching On” morning as part of National Breastfeeding Week. You may have seen the pictures of the President amidst mothers and cute babies. On the same day, Higgins welcomed the homelessness activist Alice Leahy to the Phoenix Park, where she presented him with a copy of her new book.

Tomorrow he will address a festival on lifelong learning in Limerick, and the following day he will travel to Derry to speak at a conference to mark the 50th anniversary of the Civil Rights Movement. It will be a busy weekend: on Sunday, Higgins is due back in Dublin, where he will give a keynote address at the closing ceremony of the Dublin Festival of History.

This is partly why it’s hard to contest an election against a sitting president. Any of Higgins’s five rivals for the presidency would be forgiven for noting that the President’s diary this week touches on themes – young people, health, homelessness, education, civil rights and history – that will be key planks of his re-election platform. To many observers, the lines between Candidate Higgins and President Higgins appear a little blurred.

In fairness, many of these diary items were no doubt agreed a long time ago, and to cancel them would be to let people down. But surely Higgins should have been alive to the perception the current situation would create. Some appointments are essential and should be kept – last week, for example, the President hosted some minor British royals and this week he will appoint High Court judges. Others could have been rearranged.

This election is in effect a referendum on Higgins’s performance. Given that he is very popular, that works in his favour. From the outset, it has been clear that, in a comparatively weak field, the biggest obstacle to the incumbent’s re-election is complacency or self-inflicted damage. His performance so far has been assured but hardly flawless.

His response to disquiet about an unaudited €317,000 fund for Áras an Uachtaráin – he will submit details on how it is spent, but not until after the election – was insufficient. He claims to have no problem with disclosing more information on how the Áras spends its money but has not taken serious steps to do so. The presidency has a blanket exemption from the Freedom of Information Act, but that does not preclude a president from releasing information voluntarily.

Higgins will face big questions in this campaign. What will he do in a second seven-year term that he couldn’t do in the first? Why does he have such a high turnover of staff? How would his presidency adapt to reflect the problems facing Irish society today? He should move quickly to defuse relatively straightforward questions about money. And he should clear that diary.