The Irish Times view on the presidency: Higgins should set out his stall

Michael D Higgins has been a fine president, but if he wants a second term he should set out a vision for the next seven years 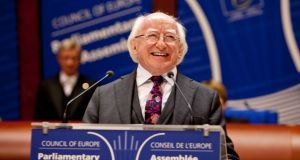 Whether or not there is a contest President Higgins should set out a clear vision of his ambitions for the next seven years. Photograph: Chris Bellew/Fennells

It looks increasingly likely President Michael D Higgins will seek another term of office. He is entitled to nominate himself and all the indications are that he will make an announcement about his intentions later this month. The president is widely popular and justifiably so. He has done a fine job and has represented this State with distinction on his travels across the globe.

While he did give a commitment during the presidential election campaign of 2011 that he would not seek a second term, there is no obstacle to him doing so. His record in the Áras demonstrates that he has the ability and the energy to continue in office. It would be a pity, though, if he was reelected without a contest. One of the reasons he has had such public support is that in the course of the bruising 2011 campaign he set out a vision of what he wanted to do and by and large lived up to those undertakings.

The challenge now, as prosperity returns, is how to ensure the maximum level of fairness

Ireland and the world have changed dramatically since 2011. At that stage this State was in the throes of a financial crisis that undermined our sovereignty and necessitated a bailout from the European Central Bank and International Monetary Fund. Thankfully those dark days are behind us. The challenge now, as prosperity returns, is how to ensure the maximum level of fairness while maintaining prudent budgetary policies to avoid a repeat of past mistakes.

On the international front the world is also a very different place. Brexit, the election of President Trump, the strains in the European Union as well as differences over its future direction, and a trade war that threatens to engulf the globe all pose massive threats.

An election would require President Higgins to set out his vision for dealing with the problems facing Ireland and the world today. It would also allow him to demonstrate that he still has the appetite for the gruelling schedule demanded of the holder of the highest office in the land.

Whether or not there is a contest, President Higgins should take the first opportunity to set out a clear vision of his ambitions for the next seven years

There is a strong chance, however, that an election may not take place if the president nominates himself for a second term. Fine Gael and Fianna Fáil have indicated they are happy for him to continue in office as they do not want to fight an election they see little chance of winning.

The Labour Party is naturally delighted its victorious candidate from 2011 is in such a strong position to win a second term, while Sinn Féin is keeping its options open about putting up a candidate. Independent senator Gerard Craughwell has indicated a desire to run but it is still not clear if he will get the required backing to enter the race.

Whether or not there is a contest, President Higgins should take the first opportunity to set out a clear vision of his ambitions for the next seven years. The electorate deserves to know what his programme for a second term will be.