The Irish Times view on Spain and General Franco: a divisive legacy 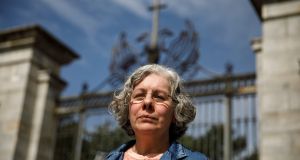 Maria Purificacion Lapena, granddaughter of civil war victim Manuel Lapena, poses outside the entrance to the Basilica of the Valley of the Fallen (Valle de los Caidos), the giant mausoleum holding the remains of dictator Francisco Franco and over 30,000 civil war dead from both sides. Photograph: Juan Medina

General Franco, the dictator who governed Spain from his victory in the 1936-39 civil war until his death in 1975, left an oppressive legacy which periodically returns to haunt Spanish politics. The most obvious aspect of that heritage is literally set in stone. The grandiose architecture and giant cross of the “Valley of the Fallen”, near Madrid, is an enduring monument to his dictatorship. It portrays the civil war as a Christian crusade against the ‘anti-Spain’ represented by the democratic Second Republic.

It is also a grim mausoleum for the remains of some 38,000 people from both sides in the civil war. Franco briefly tried to claim it was a symbol of reconciliation but it remains a source of division. The republican dead, many of them civilian victims of Francoist death squads, were taken from mass graves across the country without their relatives’ permission. Others died building the monument as slave labourers. In 1975, Franco himself was prominently entombed in the central basilica. Since then, it has become a rallying place for his dwindling band of declared admirers and a embarrassment to Spanish democrats.

Spain’s new centre-left prime minister, Pedro Sánchez, has now decided to exhume the dictator’s remains, with the support of a parliamentary majority. One would expect any democrat to support such an initiative but it has been stridently dismissed by the new leader of the conservative Partido Popular (PP), Pablo Casado.

He has also spoken disrespectfully of the campaign to exhume, identify and honour the many republicans whose remains still lie in unmarked graves across the country. The PP is a democratic party but was created largely by Franco’s political heirs. Casado echoes the views of a hard right, reluctant to acknowledge the crimes committed by his regime.

There is always a danger in opening graves that old wounds are exposed rather than healed. The task for Sánchez and for Spanish democracy is to do justice to the past while keeping the peace in the present. The challenge for Spanish conservatives is to demonstrate they harbour no sneaking regard for an anti-democratic dictator.