The Irish Times view on religious oaths: swearing in court

The President, members of the Council of State and the judiciary are still required to take religious oaths on assuming their positions 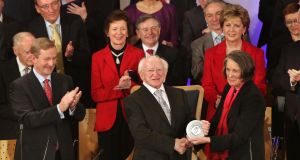 President Michael D. Higgins at his inauguration at Dublin in November 2011. The President, members of the Council of State and judiciary are all required to take religious oaths on taking office. Photograph: Matt Kavanagh

The oath – a voluntary pledge usually involving the penalty of divine retribution – has a long lineage. The Greeks and Romans swore by their swords. In ancient Egypt, one swore by one’s life. Although there has been debate over whether it has a foundation in Christianity – canon law was initially hostile to the idea – the appeal to supernatural sanctions has been common practice in courts for centuries, with regional peculiarities. In 18th-century England, when the competence to swear an oath was extended to non-Christians, as long as they could choose a method binding on their conscience, some chose the snuffing of a candle. Another method, the “chicken oath”, involved the decapitation of a live cock.

In Ireland, where the Courts Service’s health and safety policy might discourage such extravagant demonstrations of trustworthiness, the simple swearing of an oath has been the law for witnesses and jurors since the colonial era. Those who decline the oath may make an affirmation – a declaration, without reference to divine authority, that they will tell the truth. Refuse to swear or affirm and you may be fined and imprisoned.

Some have argued that to deny the opportunity to call on God to witness the truth of what they are saying would deny them their constitutional guarantee of freedom of worship. A more persuasive argument, and one cited by the Law Reform Commission when it recommended doing away with the oath in 1990, is that forcing someone to decline to take a religious oath may itself be an invasion of religious privacy. Either way, it has long been an anachronism, and the Government’s pledge this week to replace it in law with a “statement of truth” is long overdue.

But let’s not stop there. The President, members of the Council of State and the judiciary are still required to take religious oaths on assuming their positions. In all three cases, constitutional amendments would be required to change the status quo. These offices are demanding enough without requiring their – nowadays largely secular – holders to put their souls in peril.