Russian and Chinese proxies have been involved in a politically dangerous game of blame and deflection, according to the European Commission 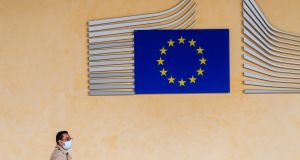 The spread of Covid-19 has “been accompanied by a massive wave of false or misleading information, including attempts by foreign actors to influence EU citizens and debates,” the European Commission warns. Photograph: Geert Vanden Wijngaert/Bloomberg

‘Disinformation in times of the coronavirus can kill,” EU foreign policy chief Josep Borrell warned on Wednesday as the European Commission published an important review of social media pandemic challenges. It is a discussion that adds an urgent dimension to the broader debate as to how and who should control the sector. And one that, the commission points out, also involves serious external interference from players such as China and Russia, whose role the report calls out.

The spread of the virus has “been accompanied by a massive wave of false or misleading information, including attempts by foreign actors to influence EU citizens and debates,” it warns. Among the examples cited was the alarming 15 per cent rise in bleach-related incidents reported by Belgium’s Poison Control Centre and the decline by a fifth of Germans willing to be vaccinated.

The nature and sources of disinformation is hugely varied. Some, such as hate speech or child pornography, is illegal and there is, for example, a legal requirement on social media platforms to take down promptly material promoting selling of products with unsupported health claims.

Other widely circulated dangerous hoaxes and misleading healthcare information – claims such as “washing hands is pointless” or “the pandemic is only a danger to the elderly” – are not necessarily illegal but can endanger lives and severely undermine efforts to contain the pandemic. Similarly, wild conspiracy theories, such as myths about 5G installations and racist tropes, may even lead to public violence.

Russian and Chinese proxies have also been involved in a politically dangerous game of blame and deflection that is helping to raise international tension. The EU’s diplomatic service (EEAS) reports, for example, that multiple pro-Kremlin outlets have reported on alleged clandestine US biological labs in Ukraine – implying the US is afraid of leakage of infectious substances on its own territory. Nature magazine has reported Chinese media and officials promoting unproven traditional Chinese medicines as Covid-19 treatments, highlighting their export as international aid.

These various messages pose different, difficult challenges to counter in a free society. The commission puts out its own counter-propaganda and runs a myth-busting site (EUvsDisinfo), but social media platforms are willing only to take down egregious breaches of community standards under a voluntary code of practice. They can do more, the commission says, to speedily label, fact-check and demote untrue content while promoting authoritative information about Covid-19 from the WHO and national health authorities.

“Fact-checkers, researchers and civil society organisations have a crucial role to play, but platforms have not sufficiently empowered them during the current public health crisis,” it argues.