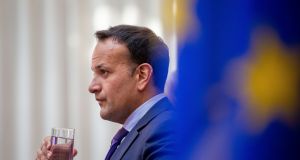 While Taoiseach Leo Varadkar has been at pains to make fabulous claims for the benefits of high-speed broadband connections for every single home and business in the country, the concerns about the broadband plan have also been described in vivid and occasionally alarming terms. Photograph: Tom Honan

Wisely spent investment in national infrastructure is a mark of good government. Allocating scarce resources to productive investment that raises standards of living, promotes future economic growth and strengthens society is one of the best things that any administration can do.

But precisely because capital investment often involves spending huge sums over a long period of time, the case for it needs to be interrogated thoroughly. And the questions arising from that process need to be completely and honestly answered. The case for spending €3 billion on the current national broadband plan is not yet proven by the Government and the questions raised by officials have not been adequately answered.

While Taoiseach Leo Varadkar has been at pains to make fabulous claims for the benefits of high-speed broadband connections for every home and business in the State, the concerns about the plan have also been described in vivid and occasionally alarming terms. It is clear senior officials in the Department of Public Expenditure believe that the scale and design of the project is not just ill-conceived – it is a huge mistake with damaging consequences for the public finances.

They say that the private company now selected as preferred bidder is being treated far too generously in a variety of respects – in the amount of investment required of it, in the allocation of risk, in being granted ownership of an asset largely paid for by the State, and so on. Officials in the Department of Public Expenditure – an institution founded, let us not forget, to help avoid the public financial disasters experienced in the past and not heretofore renowned for alarmism – also raised questions about the cost benefit analysis supplied by the Department of Communications. They warned that other public capital projects would have to be cancelled or postponed.

The Department of Communications rejected those concerns, offering the argument that the benefits of the project could not be adequately measured by a narrow analysis that focussed on short-term economic return. It is not, of course, axiomatic that the objections of the Department of Public Expenditure should disqualify the project from going ahead.

But the Government has not addressed the criticism made by its own public spending watchdogs. It has refused to reveal the level of private sector investment. It has refused to publish detailed figures on the likely take-up. It says that it will simply find more money for the project, rather than reprioritise existing promised investment. In other words, its behaviour suggests the Public Expenditure concerns are well-founded. No one questions the need for wider broadband coverage but the case for a pause, and a fresh look at the specifics of this project before the contract is finally signed, is overwhelming.