The Irish Times view on Leo Varadkar’s criticism of the media: Trivialising Trumpism

In expressing sympathy for Donald Trump’s stance towards the media, Varadkar has shown staggeringly poor judgment 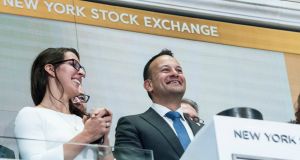 Legitimate reasons to criticise the media are hardly in short supply. As with any powerful institution – albeit one so richly diverse that the label itself, the media, is increasingly anachronistic – it suffers from serious shortcomings. Journalists, just like, say, politicians, can be idealistic, conscientious, humble, adept at self-examination and driven by a higher purpose. They can also be thin-skinned, venal, irresponsible, slow to admit mistakes and allergic to introspection.

Because journalists are accountable to their audience, criticism of their work is an important part of the democratic process. One can agree or disagree with specific complaints Taoiseach Leo Varadkar made at a private function in New York this week. Perhaps the media do trivialise political life too often, for example, although it’s a difficult argument to make for a Taoiseach who takes such care to select and publicise his multi-coloured socks and tweets pictures of himself loading dishwashers. For all that, however, nobody should question Varadkar’s right to his criticism.

The problem lies elsewhere. In expressing sympathy for Donald Trump’s stance towards the media, Varadkar has shown staggeringly poor judgment for a man in high office. Trump has waged a systematic and dangerous campaign of vilification against the media. He has called journalists “enemies of the people”, “lying disgusting people”, “slime”, “sick” and “a great danger” to the US. His battle against the media is a proxy for his war on facts and, ultimately, on the democratic system itself. Varadkar has said his comments were quoted selectively. But there has been no denial. Which part of the demagogue’s critique does Varadkar sympathise with?

For all his political strengths, Varadkar’s tin ear has always been one of his biggest weaknesses. The timing of his latest comments is remarkable nonetheless. Just last week, a few hundred kilometres from where Varadkar spoke, five staff members were murdered at the Capital Gazette, a local newspaper in Maryland. In the chilling political climate that Trump has helped to create, American journalists have received death threats and been victims of serious assaults.

If Varadkar looks on the media as a sea of trivia and gossip, perhaps he should read the latest report from the International Federation of Journalists, which finds that threats against journalists are at “epidemic” levels. Every day, journalists put themselves in harm’s way to tell important stories. Last year alone, 81 paid with their lives.

Leo Varadkar is no Donald Trump, of course. But the Taoiseach’s comments, by suggesting a failure to grasp the significance of what is happening in the US and to weigh his words accordingly, trivialise America’s authoritarian turn. Deeper reflection would serve him well.